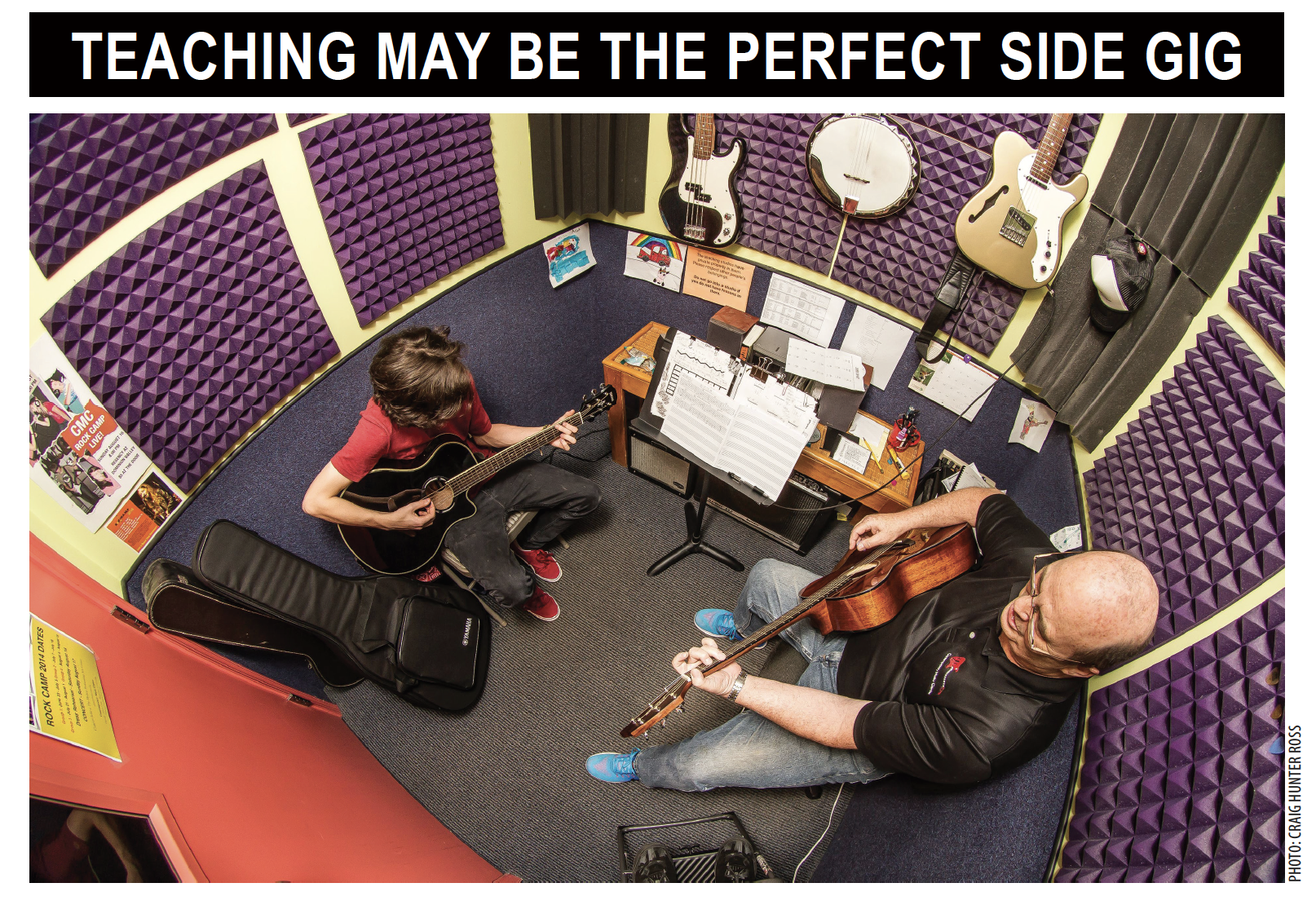 Teaching May Be the Perfect Side Gig

This article originally appeared in the March/April 2020 issue of Canadian Musician magazine.

The dream for any dedicated musician is to make enough money from playing and recording that you don’t need the “side gig.” You know, the job you do to supplement music-related income to get the rent paid and food in the fridge.

But let’s be real. The majority of gigging musicians need that side hustle. Lord knows CD sales and streaming aren’t paying for much in 2020 for most artists. So, if that’s your reality, wouldn’t it be sweet if the side gig was not only musical, but could also advance your playing career and chops? Of course it would, and that’s why teaching music lessons can be a perfect part-time job for musicians with the right background and personality.

“When I rolled over into my 30s, I kind of hit what I call my ‘one-third life crisis’ and analyzed, like, ‘I don’t enjoy this retail thing and I want to do music full-time,’” recalls Jay Watts, the drummer for popular indigenous folk-rock duo Twin Flames and a drum/vocal teacher at School of Rock in the Ottawa suburb of Orleans, ON.

Watts had been a musician his entire life and got into drumming after high school. At one point, he played in as many as nine different bands. “Naturally, like many other musicians, I had to work a crummy retail job to pay the bills … and then on the weekend and evenings I would play as many shows as I could. But as I aged, that grind started wearing on me.”

Long story short, Watts went back to university at age 31, majoring in music and minoring in history with the idea of being a high school music teacher. Fortuitously, during his studies, a School of Rock location opened near his house. He applied, auditioned, and got the part-time job.

School of Rock wasn’t meant to be his final teaching destination, but Watts didn’t realize how fulfilling teaching lessons would be, and how many opportunities it would open up for him in his music career. With other teachers at the studio he formed Bytown Lights, a cover band that does weddings, corporate events, and other occasions. (“There’s excellent money being in a cover band,” he notes). Through teaching, he also got the chance to join the Hitmen Drum Line, which performs at pro soccer and football games as well as corporate events.

“And it’s through that community that I got on the radar of Twin Flames. One opportunity will always lead to another,” Watts says. “The more hustle you put into your music career, the more valuable you will become as a teacher. If you are well-known in the community as an exceptional player, all around good person, and someone who is passionate about music, you will get teaching gigs. Good paying ones too! The harder you work, the more money you can make as a teacher. The two are truly a harmonious pairing of careers for any serious musician.”

As teaching brought about Watts’ good fortune, it became a good opportunity for two of his fellow School of Rock colleagues, too. When Twin Flames asked Watts to put together the rest of the touring band to back them up, Watts enlisted Troy Huizinga on lead guitar and Mike Giamberardino on bass. So again, teaching begat valuable professional opportunities.

But what makes a good teacher, and how does one balance teaching with being a professional musician?

“It can be challenging, for sure. You have to be okay working a lot because you might have a week where you have two or three gigs, plus you’re teaching three or four days. So, it’s kind of busy, but if you can manage your stress level and figure that out, it totally can work,” says Teri Parker, the owner of the Annex Academy of Music in Toronto. She says the majority of her dozen or so teachers are also gigging musicians and that the studio environment offers them a lot of advantages compared to private home-based lessons.

“All the teachers at my studio do about two or three days a week, so it’s not full-time; it’s just a couple days to help supplement their income and then they’ve got all those other days to gig. So, I think most people are finding an okay balance and then if a gig falls on a day they teach, then the nice thing with working in a studio is that there is a big enough pool of teachers that 90 per cent of the time we can each cover everybody’s shift,” Parker explains.

Teaching privately, which usually entails running lessons out of one’s own home or going to students’ homes, can be much more laborious. The big upside, though, is getting paid more per hour. The downside, obviously, is all the admin work and hassle that comes with being a one-person business – finding students, invoicing, collecting fees, and enforcing policies, like telling parents they still need to pay for that lesson their child missed.

Like any job, teaching isn’t for everyone. Prospective music teachers don’t just need the musical skills and knowledge; they also need the right personality. “If you want to get into teaching, you have to be able to commit to a schedule and [behave] in a professional manner. After that, it’s just a matter of making sure that you have a deep well of patience because you’re going to have some students who are super excited to work with you, and you’re going to have some who just don’t want to put in the work… It can be really frustrating sometimes as an instructor to try to get students to put in the work, but you can’t throw your sticks on the ground and yell and scream at the student or throw a chair like the guy in Whiplash. It doesn’t work like that, so patience is a really huge asset.”

Those considering teaching are advised to do their research and apply to multiple studios in their area to find the right fit. Many, like Parker’s Annex Academy, prefer teachers to have a music degree or be working towards one, though previous teaching experience isn’t mandatory. Also, different lesson studios will have different policies and programs. “Some schools are very firm with their subbing out and some schools are more flexible. So, if somebody is applying for a job, they should make sure to find out how flexible they are. If they don’t have too many gigs, then a more rigid school might be OK, but if they know they want to be able to gig and do things, they need to make sure that their boss is going to be okay with subbing out. I’ve heard of schools that go both ways,” notes Parker.

Schools will also vary in terms of how much flexibility instructors have in what they teach and how they structure their lessons. Also, most studios will have annual commitments for teachers like exams and recitals, so make sure that is sorted out before taking the job.

Overall, Watts and Parker are both emphatic that, for the right musicians, teaching can be a wonderful job that perfectly complements one’s music career.

“Absolutely, I would recommend it. It’s a great way to be able to make some decent money doing what you love,” says Watts. “And it will improve your own playing. It doesn’t matter which instrument that you’re teaching; it will force you to analyze the way that you play.”

“I have definitely met or played with musicians who do not like teaching, but I think for the majority of people, it’s a really good way to balance their incomes and balance their careers,” adds Parker. “Some people really enjoy teaching and get a lot of satisfaction out of it. Then, the hourly income, even at a studio or out of your own home, is a lot higher than a coffee shop job or something.”