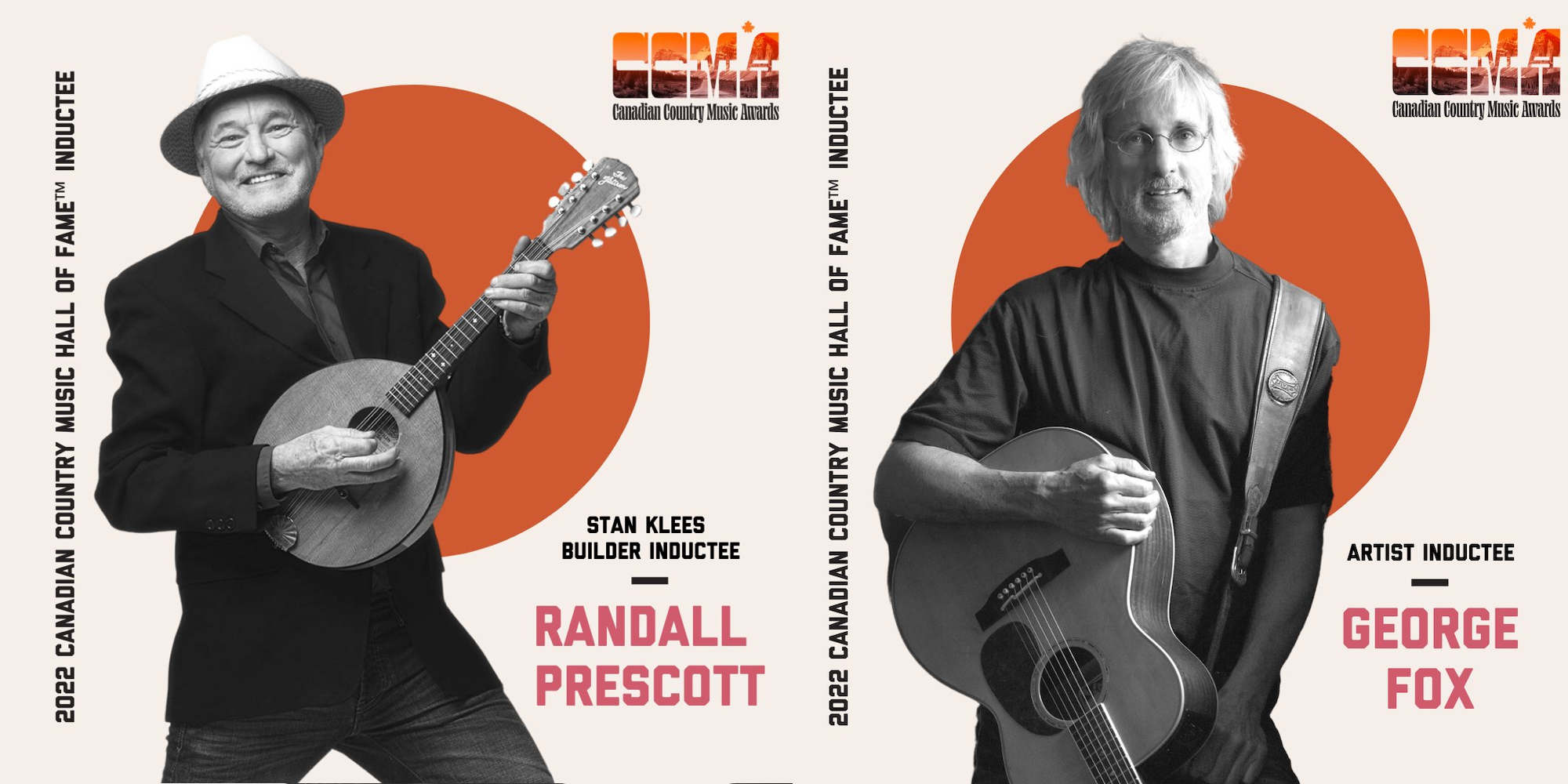 “Every year we are blown away by the submissions for consideration surrounding the Canadian Country Music Hall of Fame induction. This year was no different,” said CCMA President, Amy Jeninga. “We’re honoured to be able to highlight the incredible accomplishments that both Randall and George have achieved throughout their career and look forward to celebrating them both in Calgary this fall.”

A 16-time CCMA Award winner (10 times for Record Producer of the Year, five times for Instrumentalist of the Year, and once for Songwriter(s) of the Year) Randall Prescott is one of Canada’s most awarded producers. Nominated for a Grammy Award (Best Engineered Album) in 1999, Prescott was a member of the multi-award-winning Family Brown and Prescott-Brown taking home 3 Juno Awards. He produced the 1988 Olympic version of “O Canada,” which was the first time utilizing a First Nations language. Prescott took home the Canadian Music Publisher Award in 1990, and has produced artists such as Charlie Major, Patricia Conroy, Colleen Peterson and Tom Jackson and performed at The Grand Ole Opry with his family and Terri Clark in 2018.

Owner of Lakeside Recording Studio (twice for Studio of the Year recipient), Prescott is the co-producer of the 2021 Gary Slaight Music Humanitarian Award recipient CP Holiday Train for 22 years, raising over 20.6 million dollars and close to 5 million pounds of food for Canadians in need. Outside of the studio, Prescott spends much of his time doing charitable work in both Canada and the U.S. This induction marks Prescott’s second into the Canadian Country Music Hall of Fame™.

“It is with great honour and pride that I accept this award. Many thanks to the CCMA and the entire Country Music industry for recognizing these last five decades of creating music. Dad would be proud,” said Prescott. “Although I’m now recovering from a stroke, I continue to enjoy working on the Holiday Train and watching my children and grandchildren reach new heights.  See y’all soon in Calgary!”

Hailing from Cochrane, AB, George Fox began his music career in 1988 when his live show recordings found their way into the hands of a Warner Music Canada representative. Releasing his debut single, “Angelina,” to critical acclaim that year, Fox secured a Top 10 debut and watched his career take off. One short year later, Fox took home the CCMA Award title of Male Artist of the Year (1989), a title he held onto for four consecutive years (1989-1993). Fox’s excellence was also celebrated by the JUNO Awards with him being named Country Male Vocalist of the Year for three consecutive years (1990-1993).

Earning nine RPM Big Country Awards (5x Male Vocalist of the Year, Album of the Year, Single of the Year, Composer of the Year, Country Artist of the Year), Fox has released 10 albums, hosted the CCMA Awards for multiple years (1991-1994) and appeared in countless television specials alongside celebrated artists such as Terri Clark, Rita McNeil and Anne Murray, Garth Brooks, Shania Twain. Fox continues to tour and spends time away from music on his farm with his wife and daughters in southern Ontario.

“I'm very grateful to be recognized for my music in this special way. From the very beginning, I've tried to honour the magic and mystery of music which has brought hope, meaning, and comfort to me throughout my life,” said Fox. “I've had the privilege of connecting with others through my songs and sharing my passion for music. This induction is a celebration of the unique way in which music brings us together. Thank you CCMA!”