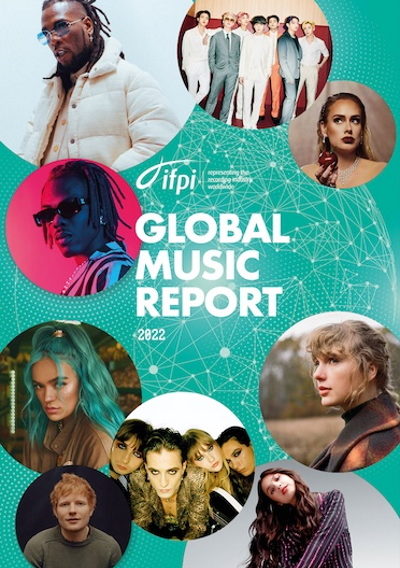 The IFPI has released its Global Music Report 2022, the comprehensive annual review of the global recorded music market. The report provides the official data on recorded music revenues worldwide, as well as insight and analysis on industry trends and developments.

Globally, the recorded music market grew by 18.5% in 2021, driven by a 21.9% increase in paid subscription streaming, and supported by a 16.1% gain in physical formats and a 4% gain in performance rights revenue. Total global revenues for 2021 were US$25.9 billion. Recorded music revenues grew in every region around the world in 2021.

The report illustrates how today’s global music industry continues to evolve and expand in new and exciting ways. That includes examples of the ways that record companies are expanding into new territories, such as Sub-Saharan Africa, the Middle East, and North Africa, and putting down deeper roots in local music communities.

The report also shows the dynamic nature of today’s music industry, where artists have enormous choice in how to bring their music to fans around the world. The report shows that there were 523 million users of paid subscription accounts at the end of 2021, and approximately 60,000 songs uploaded every single day to one leading platform alone.

“Today’s music market is the most competitive in memory,” said IFPI Chief Executive Frances Moore. “Fans are enjoying more music than ever and in so many different and new ways.  This creates enormous opportunities for artists. Those who choose to partner with a record company, do so to benefit from the support of agile, highly responsive global teams of experts dedicated to helping them achieve creative and commercial success and build their long-term careers.”

“Canada’s music market is a microcosm of this global music economy,” said Patrick Rogers, Chief Executive Officer of Music Canada. “Canada’s major record labels have invested in both resources and people – developing new state of the art infrastructure in Toronto and Montreal, and bolstering their growing teams with talented staff across Canada to help their artists create and record their music. Record labels play a critical role in partnering with Canadian artists and helping them achieve creative and commercial success in today’s incredibly competitive marketplace.”

The report illustrates the new immersive and interactive ways that artists are connecting with fans online. Areas such as gaming, fitness, the metaverse and short-form video platforms have unlocked new tools for artists as well as new revenue streams, as these are licensed platforms which means that creators are being paid when their music is being played. The report also outlines policy recommendations to support a competitive marketplace to enable music to thrive in these new environments.

The report is now available on the IFPI’s website.