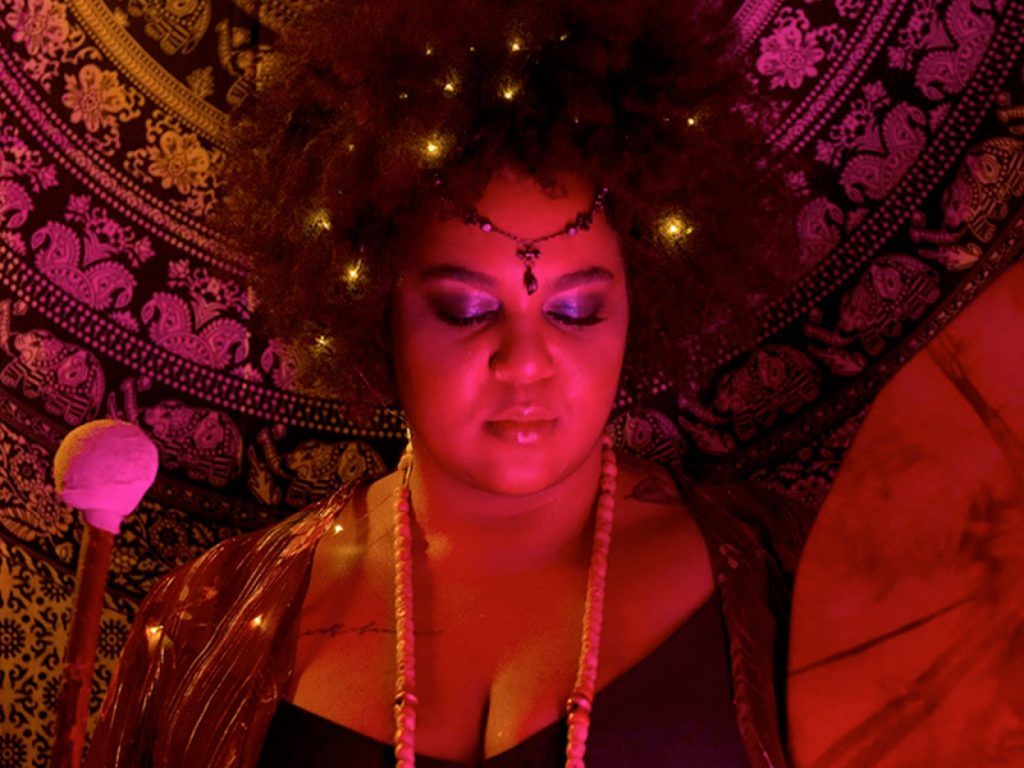 Why Did I, a Black & Queer Woman, Choose Country Music?

This column originally appeared in the July/August 2021 issue of Canadian Musician magazine.

By D’orjay The Singing Shaman

Why did I, a Black and Queer woman, choose country music? Since I started recording my first album, New Kind of Outlaw, this internal question keeps bubbling up to the surface. The question rises up even more so now that my songs – which I laboured so hard to craft and create, and getting them to the point of release – are out there.

My goal with this project was to show the complex layers of the unique experience I have lived thus far. Another goal was to guide the idea of what country music is today through an intentional stretch while still honouring the foundations of the genre. There have been so many decisions along the way that I have had to make to stay true to myself and my own internal compass while trying to hopefully recoup the five-figure financial investment it took to create this project that sits solely on my shoulders. I hired a producer and studio with a very solid track record with local/national country artists. I hired the same highly-decorated country artists/musicians to play on my songs that play with many of the top Canadian country hitmakers. I watched and listened to comps for hours on end like a hawk to make sure nothing sounded too soul-forward and that the steel guitar, fiddle, dobro, and banjo were always at the forefront of the instrumentation.

Why did I choose country music? As I am in perpetual worry of being put in another category or genre by others. Probably because of what I navigate based on statistics and the many micro aggressions I’ve experienced, it adds up to mean I am talented but I don’t look or sound like a country singer. When it comes to being a viable commercial asset, I have been kept to the outskirts of the country music world, being told/shown by much of the industry that my art and sound is folk, roots, Americana, Canadiana, and of course soul. Why does it matter? So many artists are speaking up about there being so much crossover with music creation and that genres aren’t as important as they used to be. I understand, respect, and even agree to some degree with that ideation, but when I check in with my heart and spirit every time they reply that my art is country music.

That is my truth and it continues to be this truth I have to fight for to be acknowledged. I’ve publicly spoken many times about the importance of representation in country music and how it has lacked consistent, loud, and meaningful action in acknowledging its roots of creation were borne of African people stolen from their land to be put into slavery in the south. Not to mention the completely intentional whitewashing and segregation of the genre. The industry that was integral in leading the charge in removing anyone who wasn’t cisgender/heterosexual/Caucasian/male from country music was and continues to be radio.

I am sure that many music lovers have the opinion that radio is dead or on the way out as streaming services take over, but I am going to cite findings from the CRTC Commercial Radio Policy review that was recently released in which major stakeholders from across Canada’s music industry  led a joint submission with their findings and research.

“Despite the growth of the audio streaming market, radio remains an important consumption channel for Canadians. Data from the latest Communications Monitoring Report 2020 cites that in 2019, 84% of Canadians listened to traditional radio services in a given week, compared to 42% of Canadians who accessed an online streaming service in a given month.” (Communications Monitoring Report 2020, CRTC)

So commercial radio is still very much in the driver’s seat when it comes to market share with listeners accessing the music they listen to.

A report compiled by Dr. Jada Watson (available at Songdata.com) examines a 19-year period of song activity on commercial country radio and representation.

“The key findings for this study reveal that at every level of analysis – percentage of songs played, of airplay, of charting songs, of artists signed to major labels, and of award nominations – BIPOC artists make up less than 4.0% of the commercial country music industry.”

And it continues…. “Black LGBTQ+ artists are absent from the country music industry. Except for Lil Nas X, whose ‘Old Town Road’ received very limited airplay on country format radio, no songs by LGBTQ+ artists of color are included in the dataset. The results for representation on country format radio suggest a racial hierarchy that exists within the industry and considers the deep connections between each facet of the industry. Radio airplay remains an integral component of the development of an artist’s career, including the promotional support received from a label and eligibility for awards by the two main trade organizations. This data suggests that the lack of representation on airplay does not just impact the trajectory of an individual artist, it also impacts the careers of those around them and of future artists.”

So, why did I choose country music?

Although reading Dr. Watson’s report felt like an actual punch to my stomach and brought me to tears, I still had some type of optimism that at least one or maybe two of my songs would be a fit for commercial country radio. Regardless that my album charted to the number-one spot for a regional independent radio station and spent three weeks on the top-10 national folk/roots/blues chart, I still felt like some of my art could find a home within the billion-dollar industry that is modern day country music. I mean, I had so many thoughtful and complimentary reviews of New Kind of Outlaw, made it to Hockey Night in Canada commercial bumpers, and I’ve been nominated for Country Artist of the Year at the 2021 Western Canadian Music Awards, but I am the only nominee not aired on commercial country radio. So, on the strength of those achievements as an independent self-managed artist, it shows that my music is accessible, commercially viable, and speaks to people from many backgrounds — surely there could be a space for me and my music.

I recently had a consult with a radio promotion company with a solid track record of servicing to commercial country radio and the feedback I received was: “The writing on these songs is likely too cerebral for the core mainstream country audience. They don’t like to have to think a whole bunch when trying to understand a song.”

It’s important for me to state that the person I met with was so lovely, very knowledgeable on the mechanics of commercial radio, and expressed genuine interest in working with me on a completely new project where they could be along every step of the way in making the decisions that could potentially (no guarantees of course) create a sound that wouldn’t drive the listener to punch the dial because sonically I would sound more like everyone else.

Well, that certainly seems to be what the gatekeepers want us to continue to believe, but I don’t think that is fully rooted in reality. I know so many country music lovers, myself included, who have stopped listening to commercial country radio because I feel like I am listening to one long song that never ends. On that note, we read further from the radio policy review: “While Canadians appear to be generally satis ed with their listening experience on commercial radio, satisfaction falls when it comes to commercial radio’s variety of programming, diversity of songs, genres and artists, promotion of Canadian content. In fact, commercial radio’s over-reliance on popular music was identified as an issue by Canadians” (from Attitudes & Opinions Towards Commercial Radio in Canada - Final Report, Ipsos Public A airs for CRTC).

One of the final statements of the email I received was, “As I mentioned, mainstream radio is not in the business of art.” But aren’t we called artists?

In 2021, is this really the legacy we are going to continue to uphold? Shouldn’t we have thefinal say of what our sound is without having to have countless middlemen interfering when for all of us creators, music is our medicine? Can we move past the continued mainstream indoctrination of songs about the same shit and that sound the same, and give the audience a little more credit? Just because this is the way things have been, why can’t it change and actually place more care and o er more freedom to the person who is actually producing the product (i.e. the artist)? If we all stopped making music, how would the rest of the music industry pay their bills?

I don’t think it is only BIPOC and LGBTQ2S+ artists who are given this feedback or put in these boxes. I believe this issue impacts so many artists – if we don’t conform to what a small group of powerful corporations run by an even smaller group of powerful and wealthy people dictate as good for business, then we can stick to the outside tracks and find other ways to garner a livelihood. But of course, when it comes to country radio and according to Dr. Watson’s extensive report, these rules disproportionately impact marginalized groups the most and the ones who bene t to conforming to the formula are mostly cis/white/hetero men.

Again, why did I choose country music? Because I love country music. Because I want the next small-town prairie Black Queer kid from Alberta to explore this style of music without hesitation because they have been represented by artists like me in the mainstream. Because I want to reclaim a piece of what has taken and co-opted from Black people for over 100 years now. Because it doesn’t make sense that during the month of June, CCMA will feature me for their Pride series and CMA will add my song to their Pride playlist, but I will never qualify for any of their awards because the artist I am today means I am not played on country radio, which is what qualifies you to be nominated.

I feel like there is space for it all on country radio. You can keep your formula if that’s what you want, but all artists like me are asking for is an equal playing  eld to bring our art to the party.

D’orjay The Singing Shaman was a late bloomer stepping on to the stage. Helping her clients and students heal to their most authentic selves and navigating years of her own personal limiting beliefs and experiences meant that she was 35 years old when she finally grabbed the microphone in a professional capacity. Her style of country music continues to evolve, honouring the classic country music she grew up on living in rural Alberta while also colouring outside the lines of what current mainstream country music has to offer. As a Black Queer woman, D’orjay is passionate, vocal, and committed to bringing diversity and inclusiveness to country music. www.dorjay.ca.