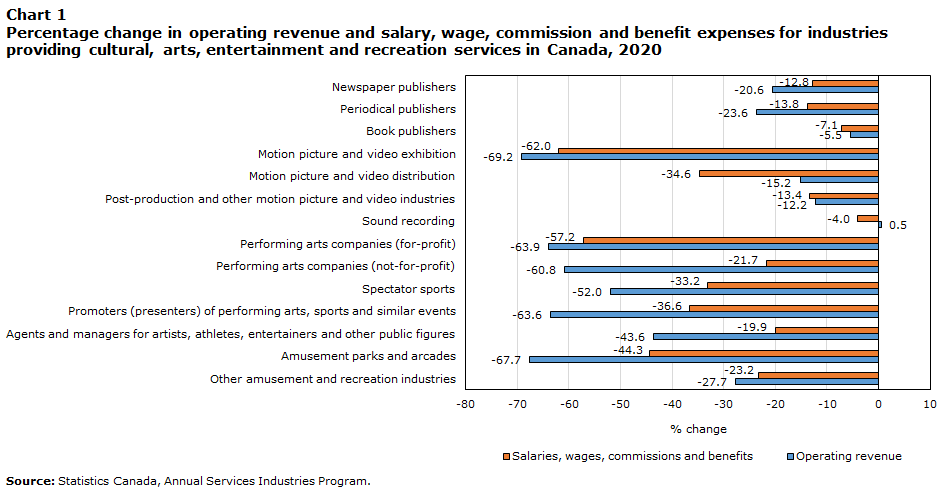 Statistics Canada has released a new report summarizing the financial impacts of the pandemic on the culture, arts, entertainment, and recreation industries in 2020. Unsurprisingly, the report outlines substantial declines in operating revenues and in wages and salaries across all sectors. The one outlier, though, is the sound recording industries, which actually saw a modest increase in revenue in 2020, but that was accompanied but a slight decrease in wages, salaries, commissions, and benefit expenses.

“The COVID-19 pandemic has had a massive impact on the culture, arts, entertainment and recreation sectors globally and in Canada. Preliminary estimates suggest that operating revenue fell in all industries in those sectors in Canada in 2020, with the exception of the sound recording industries,” write the report’s authors, Marie-Christine Bernard and Megan McMaster. “Similarly, despite government assistance, salary, wage, commission and benefit expenses fell in all industries. Several factors contributed to these extensive declines, including the in-person nature of the sectors; venue closures; the cancellation of events, festivals and performances; operating restrictions; and changing consumer preferences for physically distanced, at-home and online activities.”

The report states that digital technologies helped stem the severity of some losses for the cultural industries, thanks to the ability to create content at home and for staff to work from home. The sound recording and music publishing industries were also helped by the increased sales of streaming services in the years immediately preceding the pandemic, with streaming-related sales growing to $312.9 million in 2019, up 73.4% from 2017.As noted, the sound recording industries were the least affected by the COVID-19 pandemic, and the only segment to not experience a decline. That good fortune wasn’t uniform across all areas, however, as recording studios were negatively impacted. While music publishers and record labels and distributors saw their revenue increase a about 2%, Canadian recording studios experiences a sharp 16.5% decline in revenue, accompanied by a 14.2% decline in salaries and wages.

To read the report on the Statistics Canada website, go to HERE.