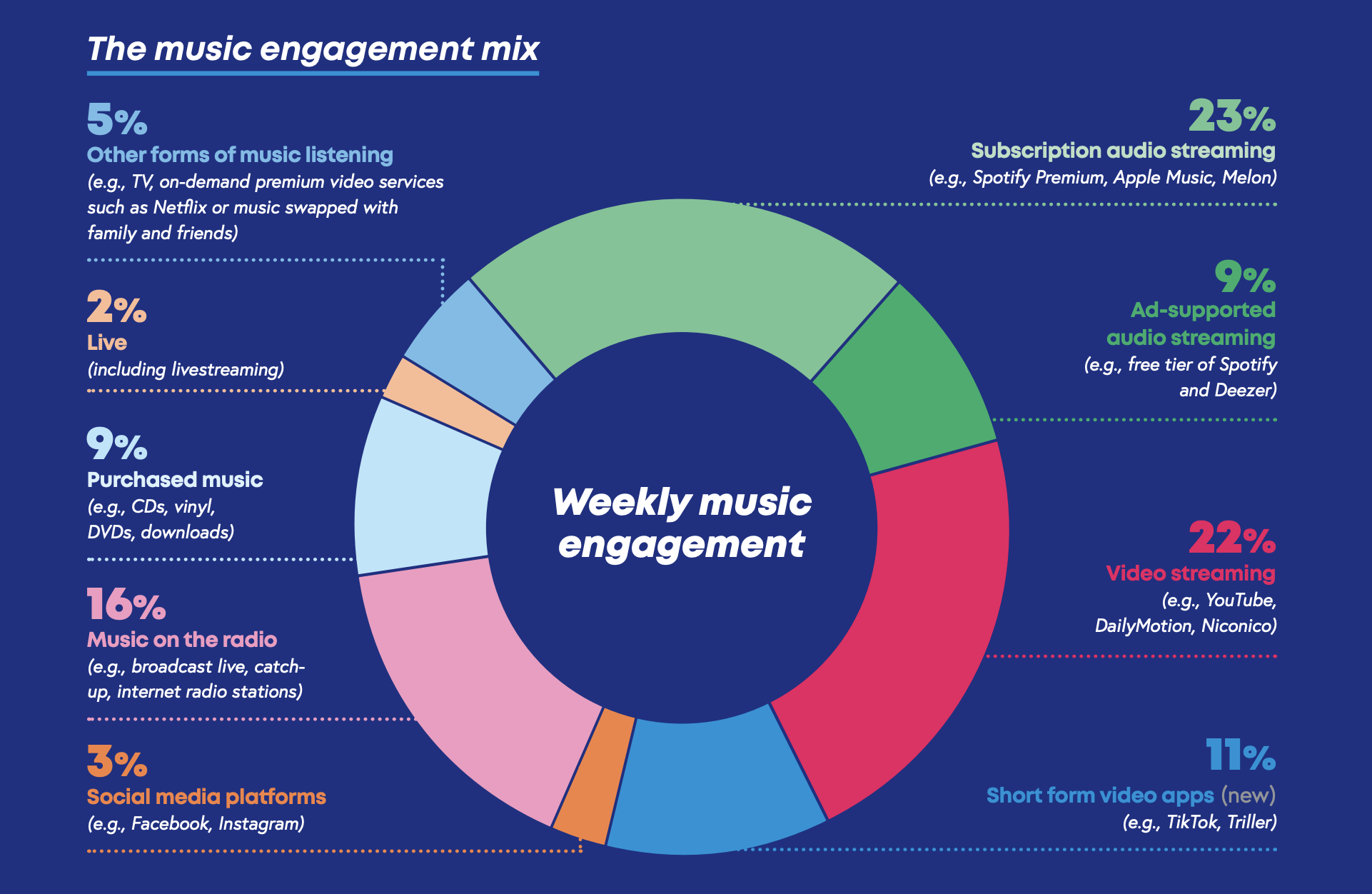 The IFPI, the global collective representing the interests of the music recording industry, has released a new report entitled Engaging with Music 2021. It explores the ways that people listen to, discover, and engage with music around the world. Based on research conducted by IFPI across 21 of the world’s leading music markets, including Canada, the report is a global snapshot of music engagement in 2021.

- Fans make their own listening choices thanks to streaming – The main reasons fans gave for their engagement with streaming were being able to choose their favourite songs, artists, and their own playlists. 68% searched for specific songs and 62% listened to playlists they created more than once a week.

- Around the world, music fans are enjoying a rich and diverse mix of genres. In addition to well-known popular genres, well over 300 different genres were named by at least one person in the 43,000-person study as music they typically listen to, including gqom, axé, and hokkien songs. This reflects the rich, diverse, and highly competitive music landscape fans now enjoy around the world.

- Engagement is fuelled by music fans’ increasingly rich experiences, with music driving innovations such as short form video, livestreaming, and in-game experiences. 68% of the time spent on short form video apps involved music-dependent videos such as lip syncing and dance challenges. Furthermore, one in three (29%) said they had watched a music livestream such as a concert in the last 12 months.

- Music makes a powerful contribution to wellbeing, providing comfort and healing to many – especially younger people – in challenging times. 87% said that music provided enjoyment and happiness during the pandemic. 68% of 16-19 said new releases from their favourite artists helped them during the pandemic.

- Music is central to what people enjoy about listening to the radio. 74% listen to the radio mainly for the music and 73% tune in to their favourite radio station because of the music it plays.

- The availability of unlicensed music remains an issue for the music ecosystem and the threat continues to evolve. Almost one in three (29%) of people had used illegal or unlicensed methods to listen to or download music, and 14.4% had used unlicensed social media platforms for music purposes.

“Engaging with Music 2021 tells the story of how fans around the globe are connecting with the artists and music they love in ways never before imagined, with the rapid emergence of short form video, livestreaming, and in-game experiences, all enhanced by people’s love of music," says Frances Moore, IFPI Chief Executive. “Record companies have enabled artists to develop their vision, licensed an abundance of music tracks to a multitude of platforms, and harnessed new technologies to pave the way for music fans around the world to connect with artists in these growing, and exciting ways. The freedom of record labels to license music to these new and immersive experiences is crucial to the future growth of the entire music ecosystem.  We are campaigning worldwide to ensure governments maintain or implement a fair environment in which such commercial deals can be made.”