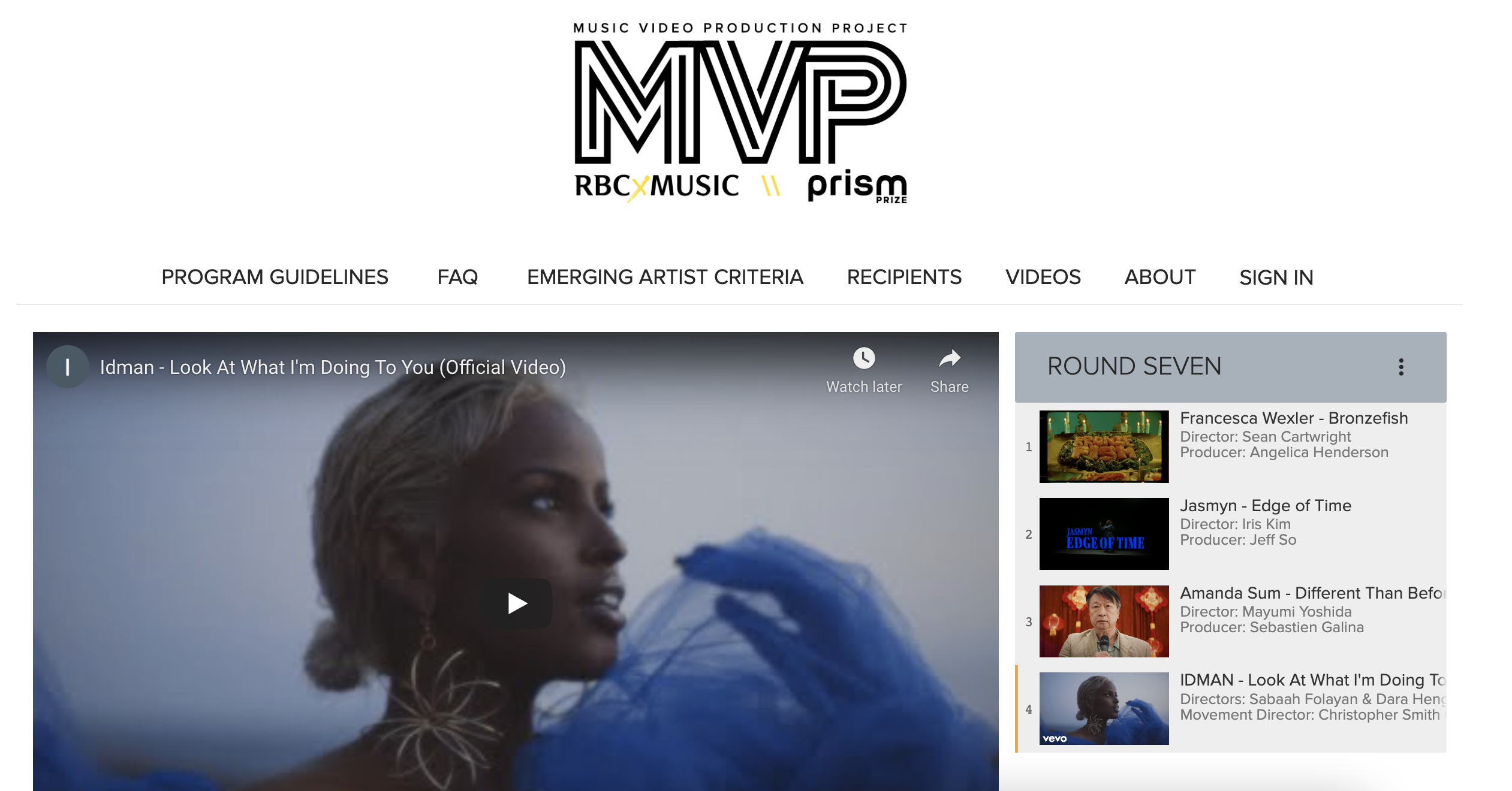 RBC and the Academy of Canadian Cinema & Television have announced that they have surpassed $1 million in funding towards the creation and production of music videos through the Music Video Production (MVP) Project. This milestone coincides with round eight of the program, in which grants were awarded to 12 teams of emerging Canadian musicians and filmmakers. Since its inception in 2018, the joint initiative between RBCxMusic and the Prism Prize has awarded 86 grants to emerging artists to support the creation of 58 music videos to date.

“Being able to work with likeminded artists to create visual accompaniment to our work is a blessing for us,” says New Brunswick’s Motherhood. “Music videos have been instrumental in promoting our music and finding a wider listenership. We love exercising the visual side of our creative muscles and we can’t wait to flex this video on y’all.”

MVP Project grants provide emerging talent with much-needed support to bring their creative visions to life, and a platform to showcase their talent. Many music videos supported by the MVP Project have received critical acclaim; most recently, Desiree Dawson's “Meet You At the Light,” directed by Alex Farah, won the Grand Jury Award for Best Music Video at SXSW following its coveted Vimeo Staff Pick designation. Additionally, the MVP Project-supported music video for Haviah Mighty’s “Protest,” directed by Kit Weyman and Chrris Lowe, was included on the top-10 shortlist for the grand prize at the 2022 Prism Prize, an annual awards event recognizing outstanding artistry in Canadian music video production.

“We are incredibly proud to have surpassed $1 million in support in what is only our fourth year of the program and to continue to help amplify new talent and diverse perspectives,” says Shannon Cole, Vice-President, Brand Marketing, RBC. “With each round of the program, the admiration our teams have for the talent in this country has only grown and we are excited to welcome round eight MVP Project recipients to this dynamic group of artists.”

“In the short time since launching in 2018, the MVP Project has grown to be an integral part of an artist’s journey, providing them with the necessary means to make their creative vision a reality,” said Louis Calabro, Interim CEO, Academy of Canadian Cinema & Television. “Surpassing this milestone in funding is a testament to the unparalleled creative talent that we have in Canada, who are expanding viewer experience with captivating and deeply moving visuals in the form of music videos.”

The MVP Project is dedicated to growing the Canadian music video community and to providing opportunities for creatives to connect in a meaningful way. In addition to receiving funding through the MVP Project grants, artists can hone their craft with development opportunities through MVP Labs, a mentorship initiative offering guidance to young filmmakers and artists around the development of music video treatments, budgets and production plans.

The recipients selected for round eight represent a diverse collection of musical genres and filmmaking styles, and were determined by a jury of industry professionals. Recipients include:

The MVP Project is part of RBC’s ongoing commitment to supporting emerging creatives through RBC Emerging Artists. Since 2003, RBC’s investments in arts organizations have exceeded $90 million supporting over 28,000 artists through these programs. In 2021, the RBC Foundation donated over $10 million as part of RBC Emerging Artists to over 185 organizations in Canada, helping to bridge the gap for more than 5,900 emerging artists.

Eligible emerging recording artists and filmmakers are encouraged to apply for round nine, which will be announced in the coming months.

For more information, go to www.mvpproject.ca.