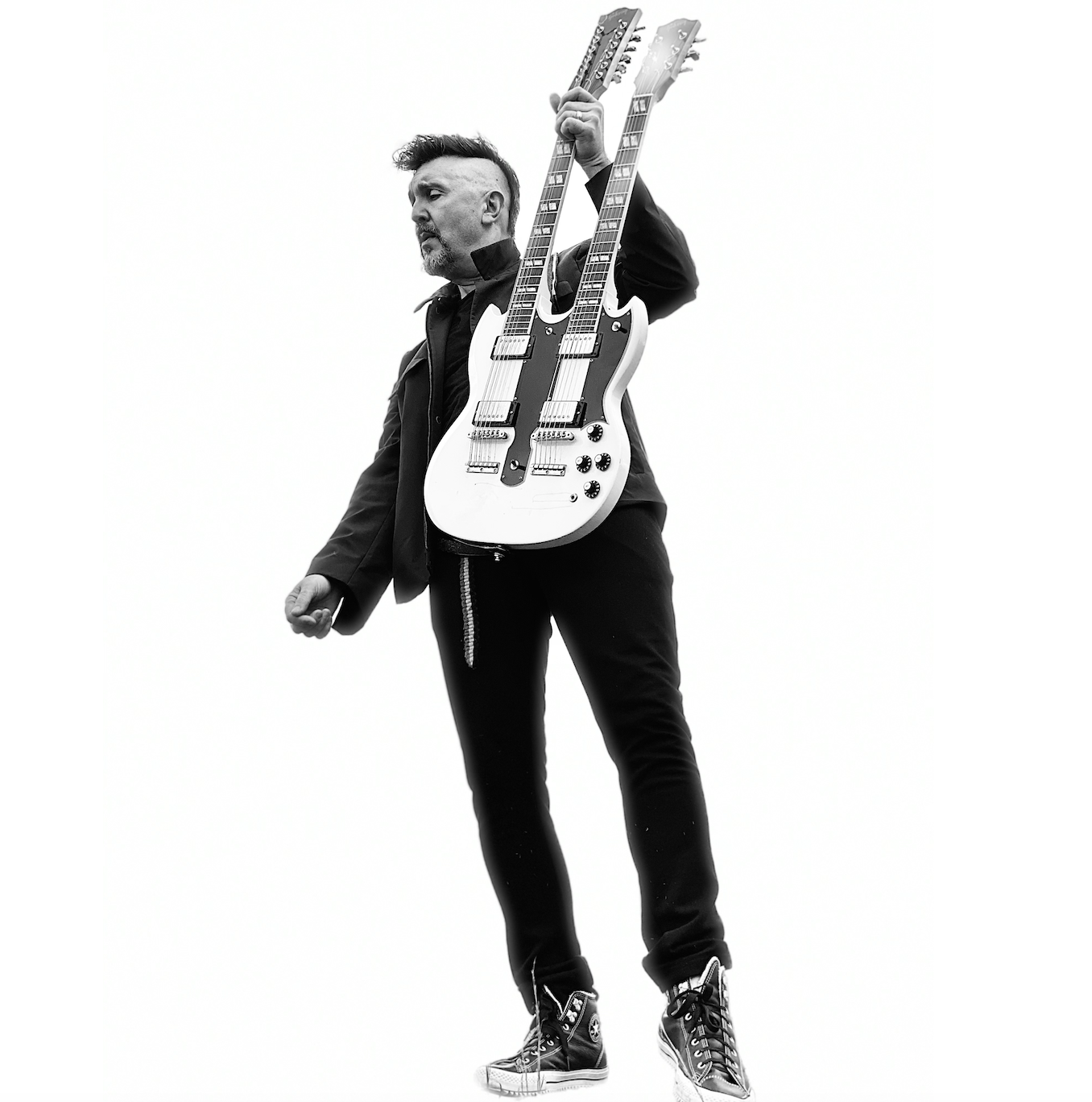 By
Contributor
on
July 12, 2022
Category:
Features

Canadian Musician contributor Hal Rodriguez recently had the chance to catch up with one of Canada's greatest guitarists, Big Sugar frontman Gordie Johnson. Hal Rodriguez is a musician, published writer, and educator in Toronto. Contact him on Instagram @jazzscriber.‍

Your most recent album, Eternity Now, was released over a year ago. Looking back at it, what are you most proud of in that record?

GJ: It’s very different from so many records that we’ve made over the years where I worked with a group of different songwriters and compiled a running song list. It could be any of these 24 songs and we pick the 12 best and put them on the record. This record was very different. It was a moment in time where we sat down, wrote a record, recorded it, and mixed it. We sat down and did it, so it was really on theme. I’d gone through a lot of changes in my life and put a lot of past trials and tribulations behind. I really felt like I was starting a new chapter in my life, personally speaking. I was feeling all these feelings and had a lot of life experiences to draw from to write that record.

The record came out the week before the world wide lockdown. All of our tour dates were postponed. The whole thing just got turfed, so then, it was a bit anti-climactic (laughs). You get this thing done: “Yes! I can tell everyone my story.. as long as they’re on YouTube” (laughs). The real pay off is standing up to a microphone and breathing life into those songs and performing them for people. So, that day is still coming, hopefully.

‍The track, “The Better It Gets”, has that distinct Big Sugar guitar riff and distorted tone. Is that your signature guitar and are you still using a Fender Pro Jr. through a large cab?

GJ: Ah, very interesting, you did your homework. I love that Fender Pro Jr. It’s like taking a very underpowered 15 watt amplifier and trying to drive a 175 watt cabinet. I’ve got 75 watt Eminence speakers in my 4x12s, so that little amp trying to push all those speakers really suffers, but the speakers stay tough. I like that combination. A lot of guys like to have a big clean amp and they push it until the speakers distort and that has never been my method.

I use so many different ways to record guitar. One thing that is consistent though, is I use my Garnet Herzog as my front end of my tone. It’s like a distortion pedal, except it’s the size of an amp and the quality of the sound coming out of it is unlike any pedal. It really is like having an amp in front of your amp. You can drive that amp really hard, but then you can pull the output back so it doesn’t fry the amp you’re going into. It’s a brilliant design. Gar Gillies designed it in the ‘60s and I’ve never played through a better circuit. There’s no better amp distortion for me than that sound. I’ve plugged it into everything: an Ampeg SVT, a Roland Jazz Chorus, and a 100 watt Marshall head. I’ve plugged it right into a PA before and it sounds the same (laughs). So, stop worrying so much about having that perfect, fancy, bespoked amp. That’s nice if you want to haul that around with you all the time. I just take my Garnet with me and I’m good to go.

Yeah, I think that was my signature SG, which I put a Bigsby vibrato on.

What was it like having Alex Lifeson participate in recording the title track?

GJ: He’s a really funny dude and a lovely man. He’s always been such a great supporter and very encouraging. I’m playing his guitar on the song, which sounds, not by mistake, exactly like Rush from 1979 (laughs). I thought, I should either call him and ask him to play on it or I’m going to have some explaining to do later (laughs). At least if I implicate the guy who’s responsible, it gets me off the hook for being a copycat. He immediately said yes. He sent his solo the next day, but not only did he send me that, he sent me acoustic guitar parts, mandolin, Turkish banjo, and a whole folder of prog rock awesomeness to put on my song. I was like “Yeah! Whoa!” (laughs)‍

You have a deep knowledge of the blues as you can play the whole spectrum from finger-style acoustic Delta tunes to blues rock slide guitar. Who were your heroes and what do you think was important for your growth as a player?

GJ: I didn’t go in a very straight line in terms of influences. I didn’t even start out as a guitar player; I started out as a bass player and to this day I still play bass. So, I was already coming into guitar with a bunch of different influences. I think like a bass player structurally and compositionally, and maybe that’s why Big Sugar riffs are so important to us. In terms of all the genres of music, I felt as a guitar player that the blues was the most expressive where your guitar should be like another human voice. As opposed to getting into blues because it was an opportunity to just solo forever. To me, what separates the greats from the goods is that the greats play like another human voice. That’s a duet between a singer and a guitar. So, that’s where I saw the blues as a great building block foundation to put all my music on.

Instead of studying blues guitar players who did that, I listened to guys who played steel guitar in church: they’re mimicing human voices. I listened to saxophone; guys like Sonny Rollins. You can hear the lyrics to other songs that he’s quoting in a song that he’s playing. I listened to Louis Armstrong like crazy. I memorized every trumpet solo ever recorded by him and those phrases come out of my guitar playing often. I never limited myself to listening to guitar players. I love Tony Iommi, but I never sat down and learned any Black Sabbath. What’s the point? He’s already crushing that. I’m listening to Miles Davis and figuring out what he’s doing, you know? (laughs)‍

You play so many instruments and styles of music. Are you a diligent practicer or do you just play whatever strikes you at the moment?‍

I guess I’m a diligent practicer, but it’s more out of necessity. If I have a drum gig coming up in Austin, I’ll go down to the studio and play drums for an hour every night. I’ll play stuff that I can play just for cardio and stamina, but then I spend a large portion of my hour working on stuff I cannot play at all and just tough it out (laughs): “I wish I could play “Sexy M.F.” by Prince and I’m going to sit here until I can do it!” I actually worked on it enough nights where I could really play it. I play drums in the studio a lot out of necessity. I don’t have all day to wait for a drummer and it’s COVID, no one’s coming over. So, I’d just go down and practice. Before I knew it, I was recording entire records and artists would call me, “Can you produce a record?”.

‍You must’ve spent a lot of time learning tunes and the roots of music. Were you playing in cover bands a lot in the beginning or were you already writing originals? ‍

I’ve had years of not even contemplating that writing your own songs was a thing. When I started out, I got really good at the bass really quick and I started getting noticed and getting phone calls. We’re talking about the 1970’s. I got hired to play at weddings and bars and I wasn’t even in high school yet. We weren’t playing original music. We were playing disco and pop songs of the day like Fleetwood Mac, Santana, and Earth Wind and Fire. So yeah, I practiced and listened to the radio every night and tuned my ear so I could learn stuff really quickly. So, I got quite good at that and played in cover bands in Detroit. You had to play five 45 minute sets, six nights a week. That’s a lot of songs. No repeats and all dance floor music. So, you learn to learn quick and be effective. That was my training for a decade before I even contemplated that I could write my own songs. By the time I moved to Toronto, I was playing with blues, jazz, and reggae singers and they all had different repertoire. ‍

You’ve been friends and collaborated with other celebrated guitarists like Warren Haynes, Rich Robinson, and Joe Satriani. What do you think has been the most important thing you’ve learned from hanging out with them?‍

One thing I’ll say about all my best guitar playing friends, it’s the sense of humour. Rich Robinson - you wouldn’t know it from his public persona, but he’s one of the funniest people walking the earth. The times I’ve spent with him, I spent more time holding my face in my hands laughing at what he’s just said. Even musically, it comes out when we play together. Warren Haynes is the same way. I can’t think of a time when I’ve laughed harder than when I’ve been with Warren Haynes. Joe Satriani is another legendary musician and funny. He’s a guy who laughs very easily. When someone else is telling a joke, no one enjoys it more than Joe and he’s kind of like that as a player too. I see that in his playing. I’d say that’s the common thread with all my guitar homies. If we can connect on that level, then I know musically, it can go anywhere. There’s a great musical freedom when you relate to somebody on that level first. ‍

What’s on the horizon for Big Sugar?‍

We hope to see the world open up again so we can come out and play. When we come out, we’ll have a whole different lineup. I feel like Big Sugar is going to go back to being a three piece power trio. For the longest time, we’ve been carrying a really big band. At one point, we were going out with twelve people on stage. There is something about the fluidity and agility you have with just three guys: bass, drums, and guitar. I’ve got a core of guys who sing really well, so the vocals become a bigger part of the presentation and we’re able to touch on all the eras of what we’ve done.‍