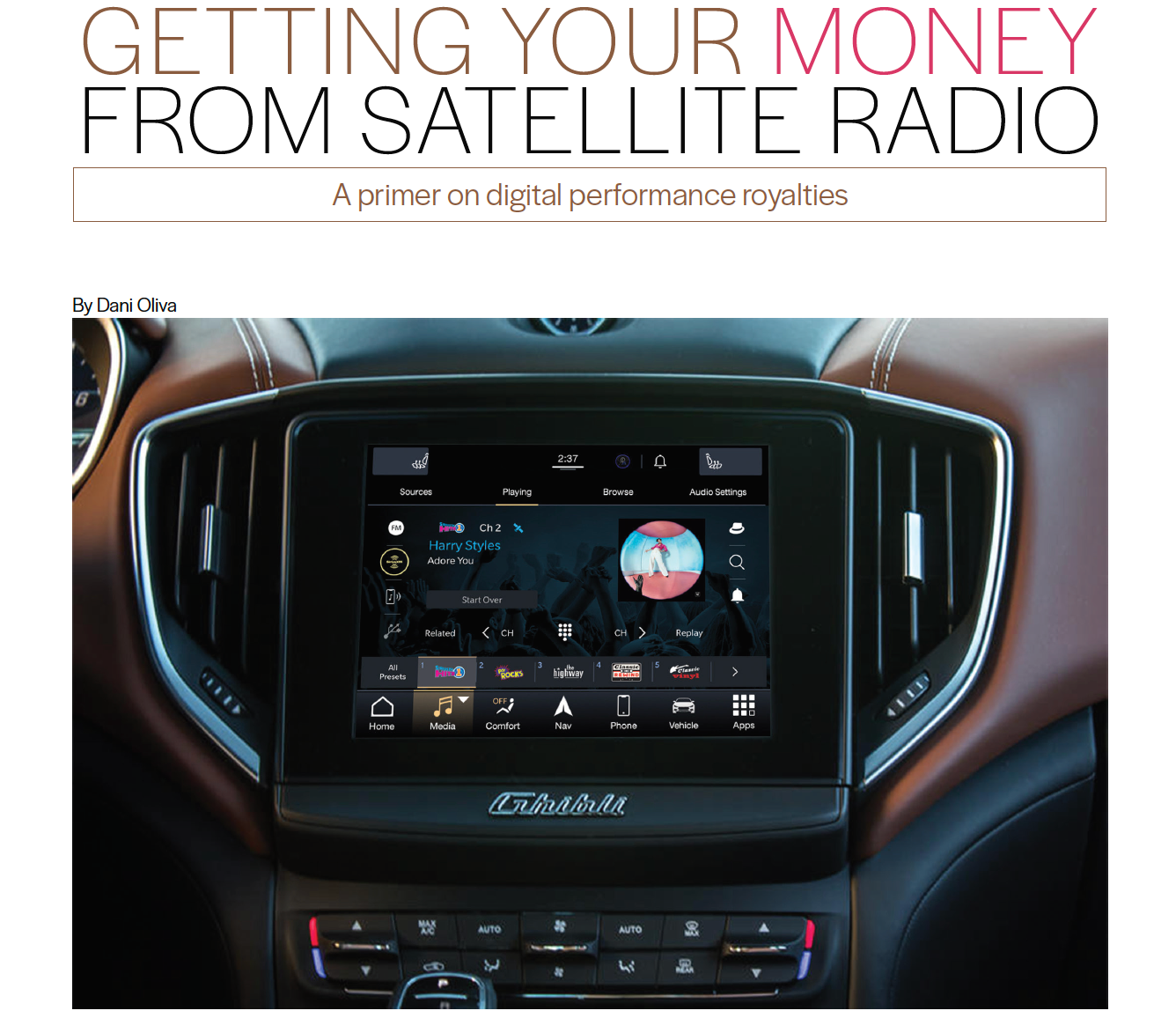 GETTING YOUR MONEY FROM SATELLITE RADIO: A primer on digital performance royalties

This article originally appeared in the March/April issue of Canadian Musician magazine.

You may have heard a publicist or radio promoter say they’ll pitch your music to satellite radio like SiriusXM and/or Stingray. Sounds like a great perk! Maybe you listen to satellite radio yourself! Beyond it being an excellent promotion opportunity if your song lands on one of these platforms, you get paid when your song is played via digital performance royalties! How do you collect these royalties and buy that Rolls, you ask?

Why do you need to know about digital performance royalties?

Well, I’ll tell ya- I have several clients that are independent (no label!)  that make upwards of $10,000 a month from digital performance royalties. Yes, $10,000 a month! My colleague Neeta Ragoowansi, former SoundExchange head of artist-label relations and senior management who helped grow the organization, emphasizes,  “if you only have so many marketing hours in the day, try to get your music on non-interactive streaming services (like Pandora and SiriusXM Radio in the US) because you can get paid when you’re played. There are savvy independent artists who have intentionally developed strategies to garner more plays on non-interactive streaming services and made 5-figure checks annually just from SoundExchange alone.” 5-figures annually! You can too! So listen up!  Let’s figure out what digital performance royalties are first.

What are digital performance royalties?

The next question that I am normally asked is whether Performance Rights Organizations (“PROs”) collect these royalties for you. The answer is unfortunately, no. PROs like ASCAP, BMI, SESAC, SOCAN collect royalties for public performance of the underlying musical works (aka compositions) and distribute royalties for the songwriter, composer, and publisher. PROs collect royalties from places like bars, night clubs, shopping centers (remember those?), television, streaming services, and terrestrial and internet radio for the songwriter/composer and/or publisher. If you’re registered with a PRO, that’s great and I’m glad you’re collecting your public performance royalties, but it won’t help you collect digital sound recording performance royalties!

If you’re Canadian, you have two major players to consider. Re:Sound, which is Canada-based and SoundExchange, it’s U.S. equivalent.  How did these players get to advocate for and collect digital performance royalties?

When internet radio, satellite radio services, and digital television radio services use a song on their platform, they send a playlist of songs they’ve played and a fee to SoundExchange or Re:Sound. SoundExchange and Re:Sound then comb through data and distribute the payments.

Who does Re:Sound and SoundExchange deliver the payments to? Both services distribute a percent of the royalties to the:

How do you get your money?

SoundExchange and Re: Sound have reciprocal collection agreements with each other.  So you have options as to how to collect digital performance royalties.

First, you can easily find out if your track has received airplay via SoundExchange or Re:Sound by visiting their websites and searching their online databases. Most people don’t know about this! You do not have to be registered with either organization to conduct a search.  If you find your artist or band name listed, you can inquire as to whether you’re owed royalties and choose how you would like to register.

Here are a few options to register as a Canadian or U.S. citizen or a resident of either Country:

The first option is you could register for SoundExchange even if you’re not a U.S. citizen or resident and you could have SoundExchange collect all international royalties for you.

You can also choose instead to register in Canada and have Canadian organizations collect all royalties generated worldwide via Re:Sound or one of Re:Sound’s member organizations such as ACTRA RACS, Artisti or MROC for performers, and CONNECT or Soproq for labels.

Hot Tip: If you’re a session musician or a backup vocalist, you may also be owed digital performance royalties. SoundExchange pays 5% of the royalties they collect to the AFM & SAG-AFTRA Intellectual Property Rights Distribution Fund www.afmsagaftrafund.org  to distribute to “non-featured artists” that performed on certain sound recordings. You can search this fund for unclaimed royalties via their website. No union membership is required to collect your royalties!

Re:Sound also collects funds for non-featured artists such as session musicians and background vocalists. To collect these funds, you can sign up for Re:Sound or one of their member organizations such as ACTRA, RACS, Artisti or MROC mentioned above. Some member organizations have different perks than Re:Sound, such as equipment insurance, so check that out before making a decision.

Cool Fact: “In 2008, RS processed 16 million plays (tracks) a year,” says Anne Yourt, Director of Communications for Re:Sound,  “by 2019 (the last year we have complete data for), we processed more than 1.8 billion plays. Each play = royalties going to rights holders.”

Options, options, so which collection option is the best for you?

Don’t flip a coin, don’t call your mom, don’t ask your bandmates, don’t call your manager, don’t call your lawyer. Contrary to our own belief, us lawyers don’t know everything! Consider taxation. Everyone’s favorite word! Talk to your business manager or, if you don’t have one, talk to your tax person. If you don’t have a tax person you love, get one! A good tax person will get rid of those frown lines on your face quicker than botox. Or at least, help you write off the botox!  If you’re doing cross-border business, such as with the U.S., make sure your tax person or the tax company you use works with or has someone on staff that understands and is familiar with cross-border taxation.

Some considerations to ask your business manager or tax person about:
For non-U.S. members of SoundExchange there may be  a 30% withholding tax applied to royalties.

If you’re from Canada, Re:Sound may collect these royalties without the deduction of the 30% withholding tax.

Alternatively, you might be able to sign up with SoundExchange for your U.S. royalties and submit a W-8BEN-E tax form (entities) or a W-8-BEN tax form (individuals) to SoundExchange to avoid the tax withholding.

Cool Fact: “In Canada, if a sound recording is used in a film or television soundtrack, composers and publishers receive [public performance] royalties, but musicians and record labels do not. If this doesn’t seem fair to you, you’re not alone. We’re advocating to have the definition of a sound recording changed to ensure musicians and record labels also receive royalties for this use of their work. Re:Sound, along with its member organizations, advocates for rights holders to ensure they are fully and fairly compensated for the value of their sound recordings.”  Anne Yourt, Director of Communications, Re:Sound.

Distribution companies could be collecting digital performance royalties on your behalf. You can choose to opt out!

If you are the rights owner of your own records (for example, an independent artist or a band), and you’re entering into a distribution deal, you can exclude the collection of digital performance royalties from your distribution deal. Oftentimes, you just have to ask your distributor or check or uncheck an “opt-in” or “opt-out” box when signing up. Ideally, the best time to do it is before you sign your distro deal!  “Artists and labels can register directly with SoundExchange, whether they are from the U.S. or abroad. The artist’s share of SoundExchange royalties will be paid directly via SoundExchange. But with the label/sound recording rights owner share, one has the option to get paid directly by SoundExchange or have their royalties paid through their distributor.  One should give careful consideration as to whether opting for digital performance royalty collection by distributors is best for them,” Ragoowansi recommends.

You can designate royalties to creative personnel!

If you’re in a band, royalties collected by SoundExchange and Re:Sound are split equally or as designated. That means you can alter how these organizations split or designate royalties, but must do so by written agreement.

Also, typically many artists will agree to share a portion of revenues generated from sound recordings with their producer, engineer and/or remixer of the sound recordings.  In the US, in the early years of SoundExchange, the organization, working with the Producers and Engineers Wing of the Recording Academy (Grammys) provided artists an option for SoundExchange to pay creative personnel directly each distribution, via a Letter of Direction, where the artist directed SoundExchange to pay their producer, engineer and/or re-mixer a portion of their digital performance royalties for sound recordings they’ve worked on.  SoundExchange wanted to alleviate the accounting burden on artists, so that artists could do what they do best- create! Eventually, the AMP Act was introduced and included in the Music Modernization Act that was passed in 2018 to codify the practice of honouring SoundExchange Letters of Direction allowing producers, engineers, mixers, and remixers to be paid directly via SoundExchange.

Creative personnel, listen up! Via a Letter of Direction,  Artists can designate a percentage of royalties due to certain creative personnel (such as producers, engineers, mixers and remixers) accredited or recognized for the sound recording on which the Artist performs. Ask your lawyer about this. For example, if you’re submitting a Letter of Direction to SoundExchange and you’re a producer that gets a certain number of points on an artist’s release, a lawyer can help you figure out the percent calculation of what you would be due directly from SoundExchange.

The definition of performer is different in Canada, a producer is not considered a performer.  Concerning Re:Sound, letters of direction are not standard. However, a Canadian artist could redirect a portion of royalties to a producer themselves, but it is not part of the Re:Sound distribution process and may need to be done outside of the music licensing collective. Again, ask your lawyer about this!

If you haven’t already explored digital performance royalties as a revenue source and you don’t have someone pitching for you, you can do-it-yourself. In fact, I absolutely encourage that you do! You can check out the different SiriusXM channels available, see where your music might fit, and submit yourself.  There is a music submission form directly on the SiriusXM Canada website. For the USA, it’s a bit tougher, but you can find a .pdf of the channels online, and try to find direct contact information for each channel you’re interested in. You can also submit yourself for platforms like Pandora. It takes a bit of online research, but you can do it!

Best of luck and see you in that Rolls soon!

A special thank you to Neeta Ragoowansi for editing this article for factual accuracy and  providing historical details concerning SoundExchange.