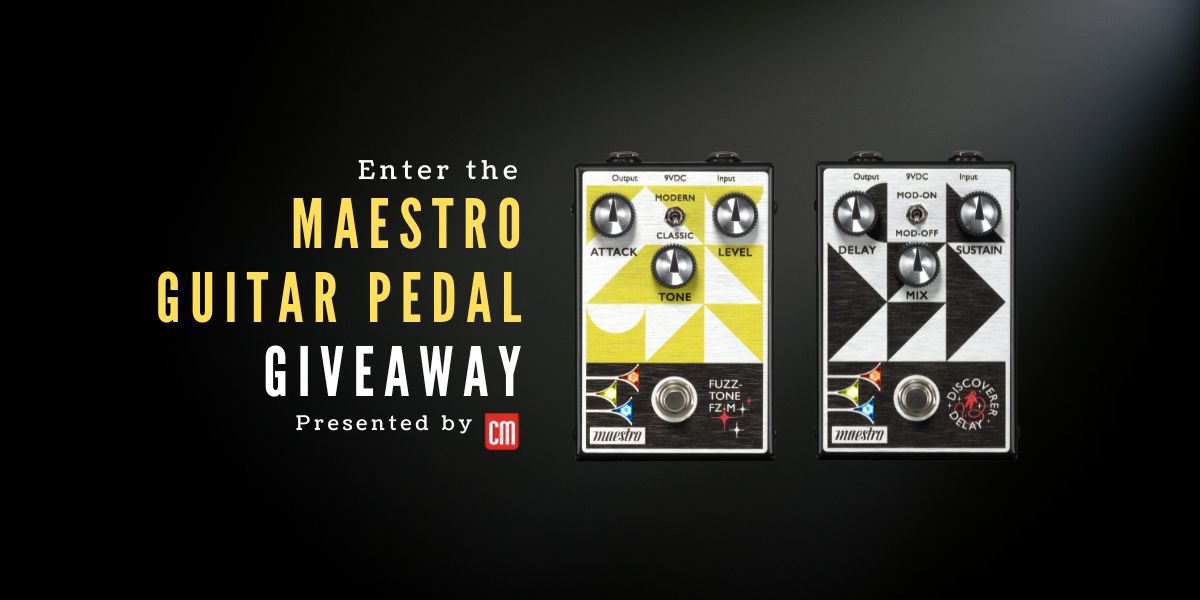 Canadian Musician is giving away one each of Gibson's new Maestro Discoverer Delay and Fuzz-Tone FZ-M pedals! All you have to do enter the draw at pages.nwcworld.com/maestro by Sept. 1 at midnight ET.

The Maestro Discoverer Delay is a modern analog delay pedal that proudly utilizes legendary analog bucket brigade device (BBD) technology to deliver classic, warm, and inviting delay sounds. The intuitive 3-knob control layout lets users quickly dial up the length of the Delay time (with a range from 20 ms to 600 ms), the amount of Sustain (delay repeats), and adjust the level of the delays in the Mix. A toggle switch engages built-in modulation that applies anything from a slightly saturated, tape-like wow and flutter effect to a heavily pitch-shifted modulation effect to the delayed signal. Two internal trim pots allow the user to adjust the Rate (speed) and Width (sweep range) of the modulation. The true bypass footswitch triggers the LED lights in the bugles in the Maestro logo when it’s on, so you’ll always know when the effect is active.

Maestro is bringing the fun and sonic fury of those early Fuzz-Tones back with the new Maestro Fuzz-Tone FZ-M. This all-analog pedal boasts a Mode toggle switch that provides two pedals in one functionality for increased sonic versatility with both an FZ-1 inspired fuzz sound and a thicker, more modern fuzz tone. Its 3-knob control layout gives you intuitive control. The Attack knob controls the amount of fuzz. The Tone control lets you adjust the timbre from bright and raspy to warm and wooly and anywhere in between. Use the Level control to set the output volume; it can go way beyond unity gain when desired. The true bypass footswitch triggers the LED lights in the bugles in the Maestro logo when it’s on, so you’ll always know when the effect is active.