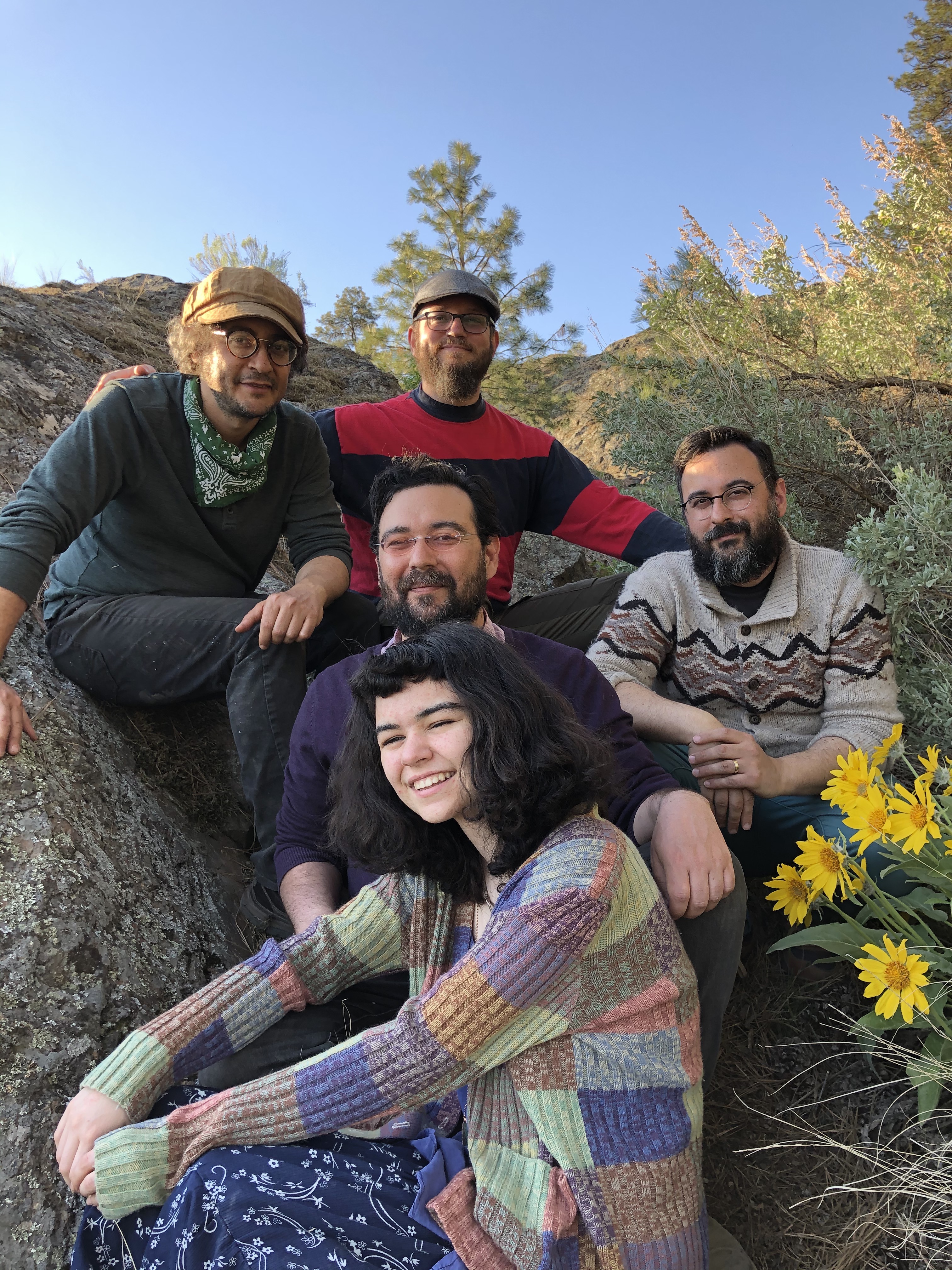 By
Contributor
on
September 26, 2022
Category:
Columns

This column was originally published in the July/August 2022 issues of Canadian Musician magazines.

We are a family that makes music for families. The Oot n’ Oots is my three brothers, my daughter, and me. At a certain point we sat down to put some thought into what we do. It

wasn’t until we were clear on those intentions that we agreed to move forward as a band. We’re inspired by the great family entertainment of our childhoods, like the works of Jim Henson and Frank Oz, whose film version of Little Shop of Horrors was a favourite, as well as Pee-Wee Herman and the Saturday morning cartoons that his show played alongside, or the poetry and artwork of Shel Silverstein, and Richard Linklater’s superb School of Rock. Our favourite family entertainment is intentional. It works to express humanity and reflect life, to nurture kids’ best authentic selves, and encourage a better world for future generations. We wanted to craft in that tradition. But that’s not where we started as artists.

In 2001, my brother Gabe and I made an album for Bif Naked’s Her Royal Majesty Records. Gabe was 21 and I was 19; we were kids. Something unexpected happened during those recording sessions. Our conscience was awoken. Music is vibrational and lyrics are packed with meaning, both intentional and intuitive. Making music is playing with potentially powerful magic. Art does not have to be moral to be valid, so why were Gabe and I pondering these things? I think we were battling our own young, strong egos. We didn’t really know who we were yet.

After a few more years, two more albums, and some great times on the road, our band broke up. Neither of us stopped writing songs, playing in bands, or recording music, but those things became our hobbies. Our focus became our jobs and the families we were starting.

Years later, at the 2014 Salmon Arm Roots and Blues Festival, my wife Rio and I were camping with our then-seven-year-old daughter Ruthie. Dan Zanes was a featured performer and we were vaguely aware of him as the former frontman of ‘80s alt-rock band Del Fuegos, who then went on to win a Grammy for his children’s music. His kids’ albums are rich with folk traditions, multi-cultural collaboration, and Zanes’ trademark good-vibes coolness. We were instant fans. We attended all three of his shows that festival weekend. After one of his sets, I asked Zanes about his former band and how he liked playing for families now. “Playing children’s music is the coolest,” he said. He also said he liked to think of it as “all-ages music.”

Already about seven years earlier, Gabe and I, along with our younger brother Ari, had recorded a full-length children’s album that was never properly mixed or released. We made it in collaboration with an upstart production company as part of a larger media venture. That whole thing fell apart, but during the process we had felt the inspiration and joy of what Zanes called “all-ages music.” That’s how we thought of it, too. Recording that first kids’ album was a dream. We slipped into a stream of creativity and wrote most of the songs in the studio. The music had real virtues. Gone was the heavy searching and pretension of youth that had weighed down our old band. In its place was simplicity, joy, silliness, and loving kindness. It felt like a breakthrough.

That album sat on the shelf for a long time before we finished it and released it as our debut album, Songs and Tales from the Great Blue Whale, in 2016. Ruthie was just born when we made the original recordings and was nine years old when she added her backup vocals to the record.

Ruthie has always loved music and has always had an amazing ear. The first artists to blow her young mind were Patsy Cline and Elvis, followed quickly by Little Richard, Chuck Berry, Wanda Jackson, The Kinks, David Bowie, and Janis Joplin. On the way to and from school every day in the car, Ruth would ask for music history lessons. Soon her favourite artists included Bjork and Beck, and she continues to search out and absorb new music to this moment.

Ruth played her first professional gig with us at the Minstrel Café the day after her eighth birthday, getting on stage with Ari, Gabe, and me to sing three songs at the end of an acoustic set. She sang two originals and a cover of Prince’s “Starfish and Coffee.” The crowd went nuts over this small kid’s mature, soulful voice. That’s when we set our intentions as a band and decided to focus on family music, and that’s when we dug out our old recordings to polish them up as well as we could at the time.

We released our first album as we started recording another batch of songs. The first song to be recorded from this new era was called “Dust Pan.” It started as a genuine lament. I had written the first repeating line of the chorus (I need a dustpan) along with the chord progression and syncopated guitar rhythm after tiptoeing around piles of dirt on my floor. I thought it was just an in-the-moment kind of thing, but then my brother Ari got a hold of it and spun a whole song out of that one line. Amazing! We started messing around in our home studio, demoing it and reworking bits. Slowly like a piece of clay, the song took shape with its uneven gait and doo-wop conceits. The addition of our eldest brother, Matthew, on drums added a little more structure to the process. Now we had a solid foundation to build songs atop.

We came up with some lighthearted epics like the onomatopoeic stomper “Animal Sounds” and the Latin-infused “Fermented Foods.” Ruthie was writing, too. She contributed a magical song that only a seven-year-old could write called “Where the Purple Geese Fly,” which the band interpreted as a late-‘60s thing in the vein of Big Brother and the Holding Company. Ruth also brought a chorus to the table with lyrics that reminded me of Lennon/McCartney’s “Please Please Me.” It was called “Saturday’s a Sadder Day” and ended up being a countrified duet we sang together about loving each other through all the days of the week. The chorus went “Saturday’s a sadder day / When I’m not with you.”

We might have crossed a line with “I Like It Saucy,” and we concede the song’s hedonistic core. It is about relishing delicious flavours, after all. And I will give our critics this: the Tenacious D level of commitment Ruth mustered to sell the song on stage at age 11, coupled with the searing analog synth line and chugging rhythms may have stirred people beyond what they expected at an all-ages show. Most people loved it, though, and it’s been requested at every live show we’ve done since. In the song “Little Sammy Davis” – it’s true – we’re singing about life, death, and sex, just like in a proper fairy tale, but no one’s complained about that song. When boy meets girl, he “gets up on one knee and they’re one.” In the next verse they have a child. We were quite polite about every subject matter, keeping it tastefully G-rated when we wanted our songs to have depth and be about something real. Something you can feel in your belly.

We called that second album Electric Jellyfish Boogaloo. After it came out, we got to play some great gigs. We were booked at the Salmon Arm Roots and Blues Festival, where we had first seen Dan Zanes, who inspired us to dive into all-ages music. We got to play at the Philadelphia Folk Festival and at the indie rock- and pop-centered Squamish Constellation Festival. The festival bookers liked having something the whole family could get behind, which they could program at 2 p.m. on a Saturday or Sunday. People would comment that we seemed more like Frank Zappa or Ween than Raffi or Fred Penner on stage, but that their kids loved it. We also always offered to do “Sing-Along Songs for Young Children” workshops at these festivals, where we’d play old Raffi songs and nursery rhymes in a circle with acoustic guitars, so that all the kids could sing along with us.

It took us a long time to make our third album, which we called Ponderosa Bunchgrass and the Golden Rule. It ended up being nominated for Children’s Album of the Year at this year’s Juno Awards. We made it slowly on evenings and weekends at our home studio, getting the bulk of it done during the weeks of winter vacation for three years in a row. For this album, we took everything we had learned so far and built on it. Our songwriting leaned further into the absurd on one hand and into wisdom songs on the other. The lightly psychedelic track “Waffles” doesn’t have much subtext, but the song “Once Upon a Dream” is straight deep. That one asks questions about the meaning of life and gives no answers. But when Ruthie sings it, kids feel it. Quite a few kids have told us it’s their favourite track on the new album. Quite a few adults have told us “Waffles” is their favourite.

Maybe the other thing that sets our new album apart from our first two is that we pulled in even more incredible musicians to collaborate with us. Check out Daniel Krakauer’s percussion on “Thank You Universe.” That playing would not be out of place on an Arcade Fire record. The artist and producer Yoro Noukousi contributed balafon and talking drum to the track “Golden Rule.” City and Colour’s Matt Kelly played pedal steel on “We,” and our friend Corinne Derrickson along with her grandson Elijah Swan-Hall grace that song with a touch of Syilx Okanagan drumming and singing. We had members of Vancouver’s Tiny Islands play brass, and members of the Okanagan Symphony Orchestra on violins and flute. A lot of heavy players are featured on this album, all stretching out, improvising, and playing for real. The music is not dumbed down or pandering in the least. Delays, stereo FX, and saturation are liberally applied at mixing.

Kids are smart. They’re sensitive. They respond to art. They feel music as much as grownups, if not more. Music is powerful magic. When Jerry Garcia and David Grisman made a kids’ album they called it Not for Kids Only. We couldn’t put it better than that, and we couldn’t have asked for a more richly rewarding path as artists and musicians.

Oot n’ Oots is 15- year-old Ruthie Cipes with her dad Ez and uncles Ari, Gabe, and Matthew, all living in Kelowna, BC. The band’s all-analog, all-ages rock show for the whole family casts a spell of freedom, lightheartedness, and laughter with music that draws on the wide history of rock n’ roll. The band has appeared at numerous festivals including the Philadelphia Folk Festival and has been honoured on best-of lists and with awards and nominations in Canada, the U.S., and Australia. Oot n’ Oots’ third album, Ponderosa Bunchgrass and the Golden Rule, was nominated for Children’s Album of the Year at the 2022 Juno Awards. www.theootnoots.com.