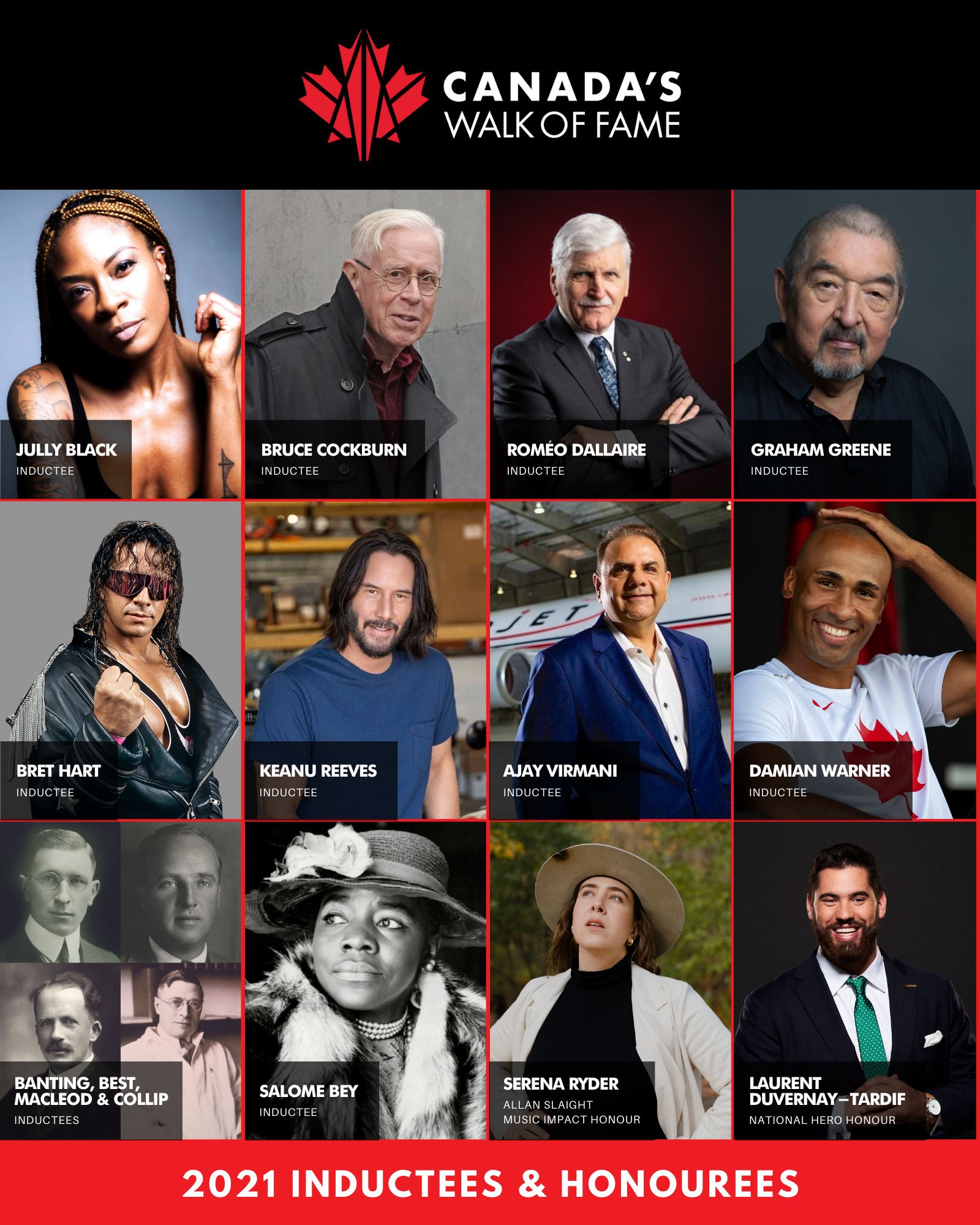 Canada’s Walk of Fame will honour 10 new inductees to its prestigious ranks, and among them are three great musicians: Bruce Cockburn, Jully Black, and Salome Bey. As well, singer-songwriter Serena Ryder has been named as this year's recipient of the Allan Slaight Music Impact Honour. From one of Canada’s most decorated war heroes, to champions in sport, Nobel Laureates, a global business magnate, and iconic names in entertainment – this year’s class of outstanding Canadians are recognized not only for their distinctive accomplishments and successes but for their philanthropy, advocacy, and contributions toward the greater good.

With this announcement, Canada’s Walk of Fame marks its 200th induction. Established in 1998 by the late Peter Soumalias and his partners Bill Ballard and Dusty Cohl, with Dianne Schwalm and in partnership with Gary Slaight, Canada’s Walk of Fame began as a small gathering to unveil an engraved star on the sidewalks of Toronto’s Entertainment District and has since expanded to a year-long national series of programs and celebrations that culminate in a national broadcast.

“Peter was a passionate visionary whose love for Canada and his dedication for celebrating and telling the stories of our country’s great achievers will continue through the legacy that he leaves behind,” said Jeffrey Latimer, CEO of Canada’s Walk of Fame. “The 2021 Inductees and Honourees are an extraordinary group of Canadians, each with a heart of gold.  Although their inspiring journeys are unique, they share in the Canadian spirit of resiliency, courage, and giving back. More than ever, especially after the global events of this past year, we need to uplift one another and celebrate Canadian excellence and achievements that continue to make a positive impact.  We’re incredibly excited to honour this year’s Inductees and Honourees at the Canada’s Walk of Fame Gala which will be a national broadcast that unites Canadians from coast to coast.”

Representing the organization’s five pillars of recognition: Arts and Entertainment; Entrepreneurship and Philanthropy; Humanitarianism; Science, Technology and Innovation; Sports and Athletics.  Inductees and Honourees will be celebrated at the Annual Canada’s Walk of Fame Awards Gala at Toronto’s Beanfield Centre on Saturday, December 4, 2021. A special broadcast will air in December on CTV.

The 2021 Canada’s Walk of Fame Inductees are:

Ajay Virmani (Entrepreneurship and Philanthropy) – Trailblazing Between the Streets and the Sky.

From cleaning windows at a downtown skyscraper to founding a multi-billion-dollar company, Dr Ajay Virmani started from the bottom. He worked his way up to become the Founder and CEO of Canada's largest cargo airline, Cargojet. In 2020 Dr Virmani was named CEO Strategist of the Year by Globe and Mail. In addition to transporting over 50 million pounds of urgent time-sensitive shipments weekly this past year, Cargojet has completed over 200 flights from China and other nations, bringing much needed PPE supplies for Canadians. Dr Virmani has also committed $3 million to healthcare initiatives, and social justice causes through the Virmani Family Foundation and the Cargojet Foundation.

Bret “The Hitman” Hart (Sports and Athletics) - The Courage and Grit of a Champion.

A true champion and one of the greatest professional wrestlers of all time, Bret Hart put Canada on the map with his gold standard in wrestling. A 32-time champion, WWE Hall of Famer, and voted one of the top 50 Canadians of all time, his strength and resiliency inside the wrestling ring are just as impressive outside of the ring. Hart overcame several health scares, including a stroke that left him paralyzed on his left side and a diagnosis of prostate cancer, both of which he has largely recovered.

Bruce Cockburn (Arts and Entertainment)– The Voice of a Generation.

Bruce Cockburn has enjoyed an illustrious career shaped by politics, spirituality, and musical diversity. For his many achievements spanning five decades, 350 songs, and 13 JUNO Awards, the Ottawa-born singer-songwriter is an Officer of the Order of Canada and is deeply respected for his activism on native rights and land mines to the environment and Third World debt, working for Oxfam, Amnesty International, Doctors Without Borders, and Friends of the Earth.

‍Damian Warner (Sports and Athletics) – The Greatest Athlete on Earth.

Fresh from his dominating performance at the 2020 Olympic Games in Tokyo, and winning Canada’s first gold medal in the decathlon, Damian Warner has taken his place as the greatest athlete on the world stage.  He shattered numerous records at the Games this summer and is only the fourth athlete to surpass 9,000 points in the all-time history of the decathlon – a triumphant culmination to a decade-long career in sport.

A team of scientists at the University of Toronto were responsible for one of the most important breakthroughs in modern medical history – the discovery of insulin.  As a result, they received the Nobel Prize for the medical breakthrough that would significantly improve the quality of life for millions of people with diabetes worldwide. 2021 marks the 100th anniversary of the discovery of insulin and the first Nobel Prize to be awarded to Canada.

Graham Greene(Arts and Entertainment) – One of Canada’s Most Beloved and Iconic Actors.

Born on the Oneida Six Nations Reserve outside Brantford, ON, Graham Greene is an Academy Award nominee who attributes his success to theatre training at Native Earth Performing Arts and the Stratford Festival. He has appeared in more than 100 productions, including Dances with Wolves, The Green Mile, Die Hard with a Vengeance, Transamerica, and The Twilight Saga: New Moon.

Jully Black is a platinum and multi-award winning international recording artist, songwriter, musical stage and television actress, broadcast personality – and Canada’s Queen of R&B/Soul.  She has collaborated with music heavyweights, including Destiny's Child, Sean Paul, Nas, Kardinal Offishall, Ian Thornley, Serena Ryder, Dan Hill, Measha Brueggergosman, Jay-Z, Celine Dion, Elton John and Etta James, to name a few. Her passion for philanthropy has taken her from the shanty towns of Bangladesh to the villages of South Africa and Kenya and all across Canada. She is the founder of the 360 health, wellness and lifestyle organization '100 Strong and Sexy,' and fitness movement 'The Power of Step'.

Keanu Reeves is an iconic actor, producer, and director who has entertained audiences worldwide for more than three decades. Reeves was raised in Toronto and performed in various local theatre productions and television before becoming one of Hollywood’s most sought-after leading men, fronting blockbuster franchises like The Matrix and John Wick.

The Honourable Roméo A. Dallaire served with great distinction in the Canadian Forces for over 30 years and continues to be a model of dedication and selflessness. He became a war hero as Force Commander of Rwanda's United Nations Assistance Mission during the 1994 genocide and continues to dedicate his life to international humanitarian work and eradicating the use of child soldiers.

Click here to learn more about Roméo A. Dallaire.

Salome Bey is a cultural icon whose influence in music and theatre reaches worldwide. Bey received Tony and Grammy nominations for her principal role in Broadway's Your Arms Too Short To Box With God. She also earned two Dora Mavor Moore Awards for her seminal work Indigo!, a cabaret show that she conceived, wrote and starred in, chronicling the history of Black music. In addition, she recorded three albums and toured internationally with her siblings as Andy & The Bey Sisters and is featured on two albums with the legendary Horace Silver. Known for her extensive activism and advocacy work in the community, Bey contributed vocals to the 1985 song "Tears Are Not Enough," recorded by a supergroup of Canadian artists to raise funds for Ethiopian famine relief.

The 2021 Canada’s Walk of Fame Honourees are:

Each year, Canada’s Walk of Fame presents the Allan Slaight Music Impact Honour to a remarkable musician, duo, or group that continues to make a positive impact with their talent and benevolence in the field of music. Singer-songwriter Serena Ryder is this year’s recipient and will be recognized during the Canada’s Walk of Fame Gala.

Canada's Walk of Fame introduces the National Hero Honour; a special recognition presented to an individual whose selflessness, dedicated efforts and outstanding contributions have made a significant difference in our society. Laurent Duvernay-Tardif is the inaugural recipient of the National Hero Honour. As a star player with the Super Bowl-winning Kansas Chiefs, Duvernay-Tardif made international headlines as the first NFL player to opt-out of the 2020 season and deferred his $2.75 million salary to join the frontline pandemic efforts in his hometown of Montreal. He was named co-recipient of the Lou Marsh Trophy, Sports Illustrated's Sportspeople of the Year, and was presented with the Muhammad Ali Sports Humanitarian Award at the 2021 ESPYs.

For a complete list of past Inductees, along with more information on Canada’s Walk of Fame, visit www.canadaswalkoffame.com.