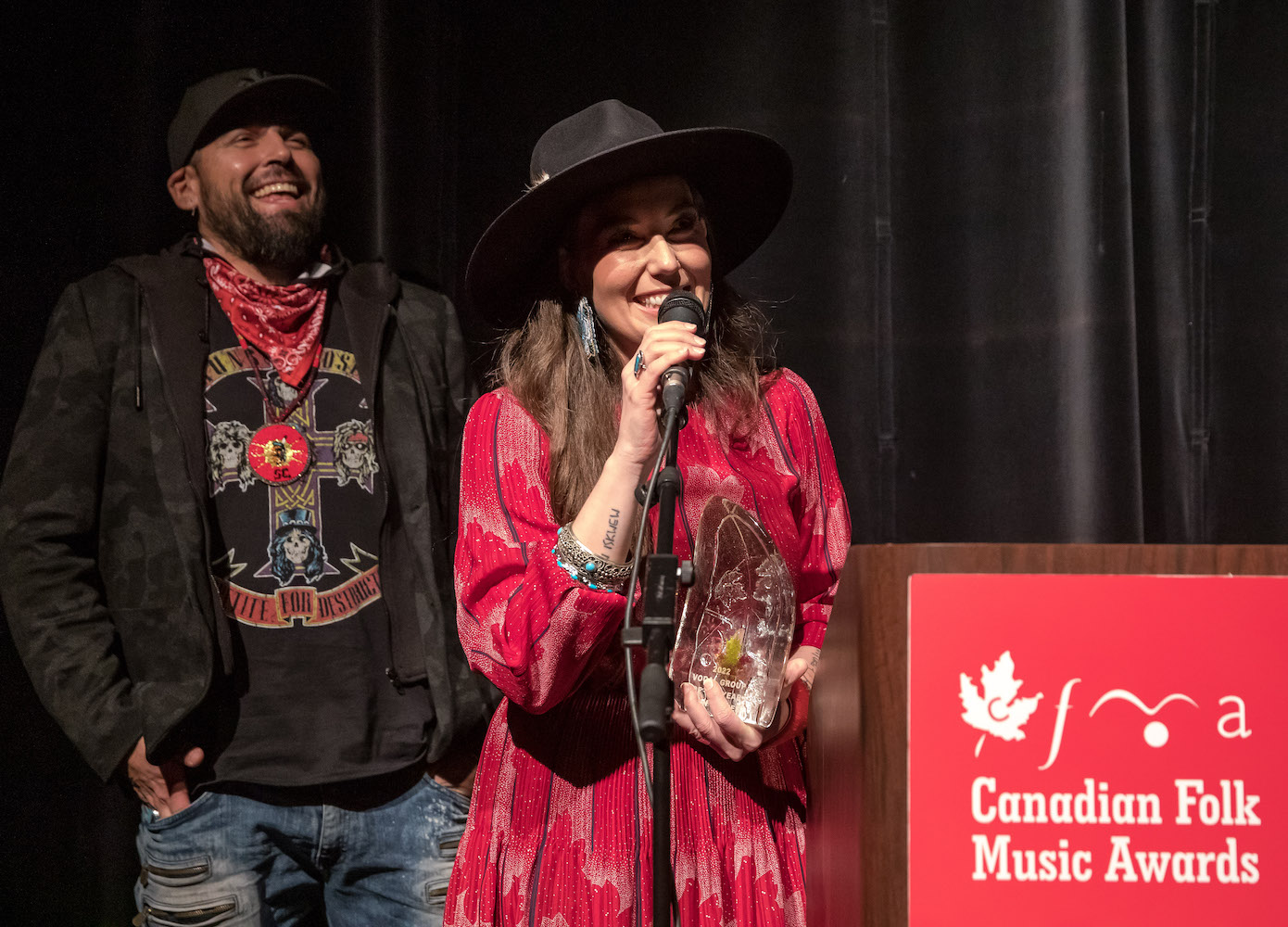 Over the course of two night this week, the Canadian Folk Music Awards (#CFMA2022) were presented at The Guild in Charlottetown, PEI. The 17th edition of the event was hosted by Chelsey June of Twin Flames and Benoit Bourque in a bilingual evenings filled with fun and music, including performances by Dana Sipos, Eliana Cuevas, Morgan Toney, Bouches Bées, Ian Tamblyn and Alicia Toner. Ten awards were handed during each of the two evenings, including the Oliver Schroer Pushing the Boundaries Award. Among the artists that received awards, Allison Russell and Cédric Dind-Lavoie stand out as having received three awards each.

Frank Evans & Ben Plotnick received the CFMA for Instrumental Group of the Year for their album, Madison.

The 2022 CFMA for Solo Artist of the Year was awarded to Prince Edward Island-based musician Alicia Toner for her album, Joan.

The Award for Contemporary Singer of the Year was awarded to Rob Lutes of Quebec for his album, Come Around.

The wife and husband duo of Chelsey June and Jaaji, better known as Twin Flames, were awarded Indigenous Songwriter(s) of the Year for their album Omen  — their second award of the week, having received the Vocal Group of the Year during the Friday Night Awards Concert.

Canadian singer-songwriter, multi-instrumentalist, poet, and activist Allison Russell of Montreal stands out as one of two artists to receive three awards during the 2022 CFMAs. Russell received the New/Emerging Artist(s) of the Year, the English Songwriter(s) of the Year, and the Contemporary Album of the Year for her album Outside Child.

Composer and multi-instrumentalist Cédric Dind-Lavoie also took home three awards: Instrumental Solo Artist of the Year, Producer(s) of the Year, and had the special distinction of receiving the Oliver Schroer Pushing the Boundaries Award for his album, Archives.

The musical duo of Nick Adams and Taes Leavitt, better known as Splash'N Boots of Ontario, received the Children’s Album of the Year award for their album, Heart Parade.

The Canadian alternative country trio, Elliott Brood took home the award for Ensemble of the Year for their album, Keeper.

Traditional Singer of the Year went to Ewelina Ferenc of the Toronto-based Polish/Canadian trio Polky for their album, Songs From Home.

The 2022 CFMA for Traditional Album of the Year went to Kitchen Days by Americana folk artist Braden Gates of Edmonton.

Global Roots Album of the Year was awarded to the album Wutiko by Senegal-born and Quebec-based musician Élage Diouf.

The 2022 CFMA for Single of the Year was awarded to Winnipeg-based musician William Prince for his song “Gospel First Nation” from his album of the same name.

And the Slaight Music Unsung Hero Award was presented this year to Geneviève Nadeau who has become a formidable manager, director, and producer in Quebec's vibrant trad music and song scene.

For more information, go to www.folkawards.ca.

Pictured above: Twin Flames at the 2022 CFMAs by Michae Bernard.