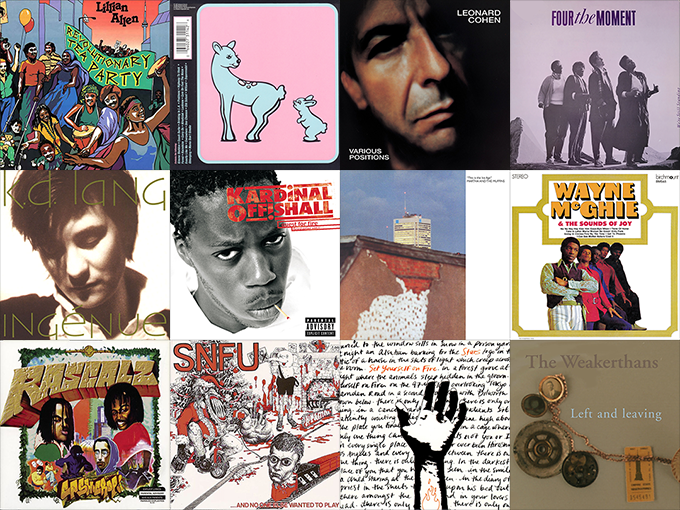 Voting for the 2022 Slaight Family Polaris Heritage Prize has opened. This annual campaign encourages public voting to discover and support exceptional Canadian music albums from the past. The companion award to the Polaris Music Prize, winners and nominees for the Heritage Prize are also Canadian albums of artistic distinction, without regard to sales, genre or affiliation. This is Polaris' version of a hall of fame where it honours meritorious Canadian albums that pre-date the first Polaris Music Prize in 2006.

This year there are 12 nominated albums up for consideration:

Martha and the Muffins - This is the Ice Age

SNFU - ...And No One Else Wanted To Play

Stars - Set Yourself on Fire

The Weakerthans - Left and Leaving

Heritage Prize balloting was officially opened on Monday, Sept. 19 during the 2022 Polaris Gala, where Pierre Kwenders’ José Louis And The Paradox Of Love album was awarded the 17th annual Polaris Music Prize.

Two of these albums will receive Heritage Prize designation this year. One album will be chosen by public vote campaign and a second will be determined by a Heritage Prize jury made up of music media and music historians.

This year’s Heritage list features six returning nominated albums (Revolutionary Tea Party, Glee, Ingénue, This is the Ice Age, Set Yourself on Fire, and Left and Leaving) and six first-time album nominations (Various Positions, We’re Still Standing, Quest for Fire: Firestarter, Vol 1, Wayne McGhie & The Sounds of Joy, Cash Crop and ...And No One Else Wanted To Play).

Voters will be able to submit ballots once per day. Voting closes Friday, Oct. 14 at 8 p.m. ET / 5 p.m. PT. The new Heritage Prize designates will be revealed Friday, Oct. 21.

Heritage Prize winners are commemorated with limited-edition artwork commissioned and inspired by the music on these designated albums. Examples of past winners’ works, including those honouring the likes of last year’s winners Nomeansno and Faith Nolan, can be found HERE.

Thirty-five albums have received Heritage Prize designation since its introduction in 2015. Past winning albums include Peaches’ The Teaches Of Peaches, Harmonium’s L’Heptade, Glenn Gould’s Bach: The Goldberg Variations, Dream Warriors’ And Now the Legacy Begins, and Buffy Sainte-Marie’s It’s My Way!