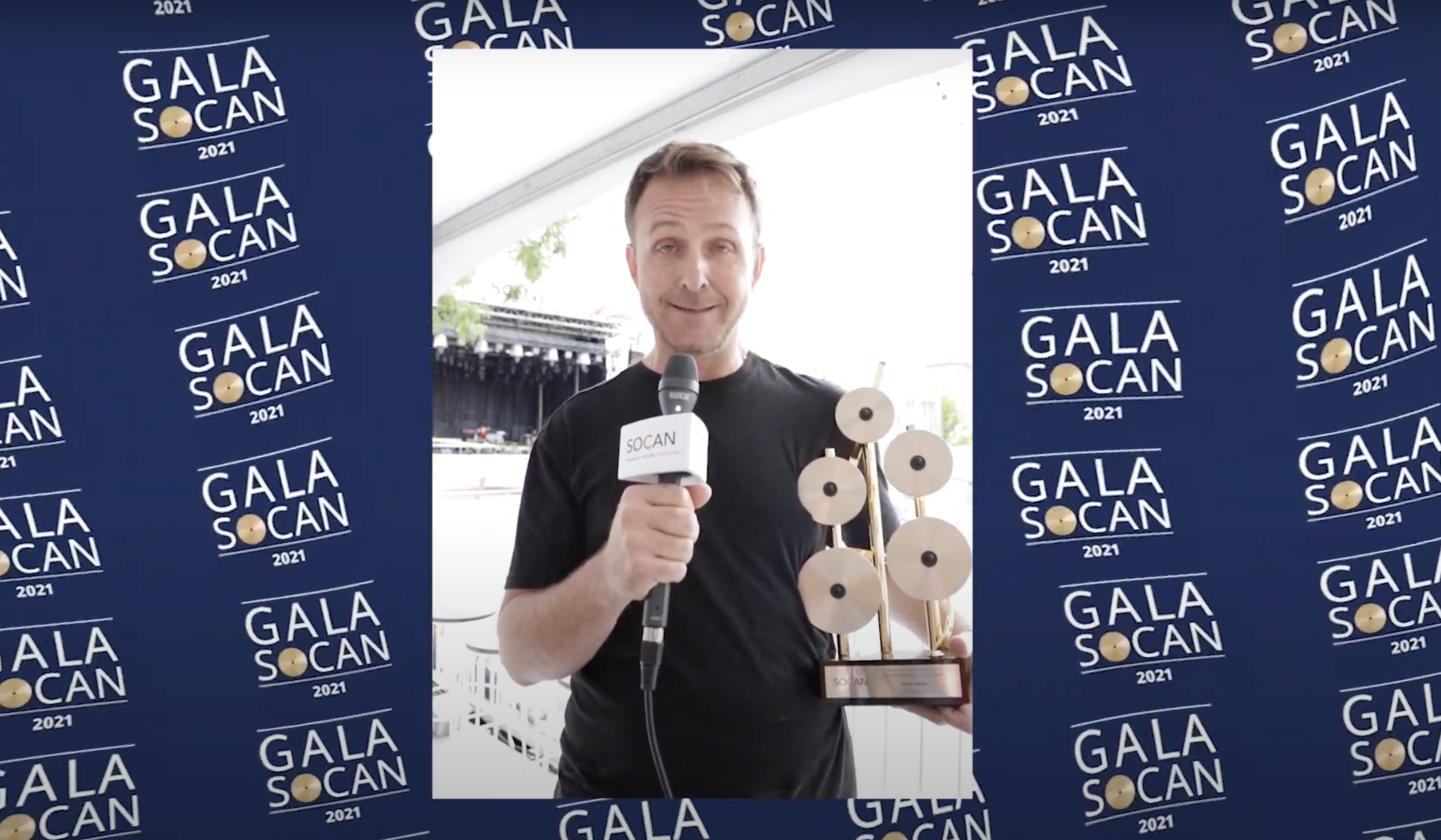 Nearly 100 SOCAN Awards in 22 categories will be presented to the incredible work of Québec's songwriters, composers, and music publishers in 2020 at the 32nd annual SOCAN Gala.

Special presentations to winners will be published throughout the week on social media and on a dedicated at GalaSOCAN.com. Follow @socanmusique on Facebook, Instagram and Twitter (#GALASOCAN) to join in the week-long celebration of winners whose work reflects an extraordinary year.

"The year 2020 showed all of us just how valuable and powerful music can be," says Jennifer Brown, SOCAN CEO. "The past 18 months reminded us of the deep connection we have with music and the huge role it plays in our mental and emotional health. We all owe a debt of gratitude to SOCAN member songwriters and composers for their extraordinary talent. Our members are at the heart of SOCAN's mission: we succeed when they succeed, and we are proud to pay homage to their amazing accomplishments with the 2021 SOCAN Gala."

*   Kaytranada had a brilliant year in the wake of the success of his album "Bubba," which won him two Grammys and a JUNO Award, and he earns the SOCAN Songwriter of the Year Award.
*   Cristobal Tapia de Veer has established himself as a go-to screen composer of international stature. After a second nomination at the BAFTAs in London and the success of the TV series White Lotus (HBO) and Hunters (Prime Video), he gains the SOCAN Screen Composer of the Year Award.
*   Steve Marin is the creative mastermind behind the success of duo 2Frères, and his success showed no sign of slowing down in 2020. He earns the SOCAN Songwriter of the Year - Non-performer Award for the second time in three years.
*   Bloc Notes Music Publishing is this year's winner of the SOCAN Music Publisher of the Year Award for their commitment to supporting music creators on their road to success.
*   Simon Rosen is Québec's treasure in music production, and his international career continues to grow as shown in collaborations with Selena Gomez, Khalid and Swae Lee, among many others. He is the winner of this year's SOCAN International Award.

*   SOCAN Breakout Award - Chiiild. Rarely has a musical project from Québec had such a smashing introduction by generating immediate interest south of the border.
*   SOCAN Country Music Award - Cindy Bédard. For a remarkable year in 2020 following Bédard's release of her album Après l'orage at the onset of the pandemic.
*   SOCAN Electronic Music Award - CRi and Apashe. This year's Electronic Music Award is a tie between two deserving artists: CRi for the magnificent album Juvenile comprising all -Québec-based collaborations; and Apashe, the Montréal-based sensation who has been turning heads all over the world thanks to the bold and uncompromising fusion of symphonic and electronic music on his album, Renaissance.
*   SOCAN Hip-Hop/Rap Music Award - Shreez. With his album On Frap, Shreez quickly made a name for himself on Québec's rap scene by introducing "drill style" to a growing audience.
*   SOCAN Licensed To Play Award for ongoing commitment to supporting fair music licensing - L'Anti Bar & Spectacles. Thanks to their boundless energy, extraordinary resourcefulness and uncompromising respect for the rights of creators, the team at L'Anti, in Québec City, was able to thumb its nose at the pandemic with multiple licensed online initiatives so that artists can continue to meet their audiences.
*   Hagood Hardy Award - Emie R. Roussel Trio. The Hagood Hardy Music Award for jazz, instrumental and world music, couldn't come at a better time for the three-piece band which celebrated its 10th anniversary with a fifth album, Rythme de passage, which earned them, among other things, a JUNO nomination and a warm welcome here and abroad.
*   Jan V. Matejcek Award New Classical Music Award - Roxanne Turcotte. A well-known figure on Québec's electroacoustic scene for several decades, Roxanne Turcotte is involved in myriad projects and is committed to educating the younger generation about unusual sounds that are untouched by trends. The Jan V. Matejcek Award for New Classical Music highlights the respect she has earned from her peers.
*   The SOCAN Viral Music Award is given to the most popular music on streaming sites without the help of radio broadcasting. This year's recipient is Lubalin, who virtually broke TikTok in 2020 thanks to his offbeat musical creations inspired by social media comments.
‍

The complete list of winners and further details can be found at www.galasocan.com.

SOCAN Achievement Award winners are determined collaboratively between the SOCAN Board of Directors' Membership Committee and the leaders of SOCAN's Membership department. General SOCAN Awards are determined strictly by royalties success in their musical genres.
SOCAN Achievement award winners receive "The SOCAN" - the world's first and only industry trophy that is also a musical instrument. The five crotales that make up the trophy are made by SABIAN, the world-renowned, New Brunswick-based manufacturer of percussion instruments.

The annual SOCAN Awards, which celebrates and honours the work of SOCAN's Anglophone members, was held in a similar online event in May of this year.
Music fans can support creators and publishers by making a donation to the SOCAN Gala's charitable partners, the Unison Benevolent Fund and the SOCAN Foundation, both of which support music industry workers and music creators in their personal lives and careers.